The secret to great pizza is great pizza dough, and since it’s the primary ingredient, the type of flour you use is going to have a significant impact on the quality of your crust.

Before you use any old flour you have in your pantry you should learn why the type of flour is important, and we’ll share with you the best flour for your perfect pizza.

What is the best flour to make pizza dough?

While it used to be that 00 flour was considered the only proper pizza flour, the proliferation of different types of flour as well as the popularity of different styles of pizza other than Neapolitan-style, means you now have greater choice.

Any of the flours below can be used to make great pizza dough, each with their own benefits, and most can be found in your local supermarket.

While most of the flours we’ve mentioned above are readily available in most supermarkets, we can’t guarantee you’ll have access to them locally. The good news is that we live in a digital world, so your perfect pizza dough flour is only ever a few clicks away.

If you’re hungry for pizza and your local supermarket has let you down, here are some online alternatives we suggest:

Traditional imported 00 flour from Italy, Vivace’s All Natural 00 is entirely unbleached, GMO-free, and is perfect for making traditional Italian-style pizza or classic Roman pizza. The flour is also milled in a small town south of Rome for that authentic flavor. 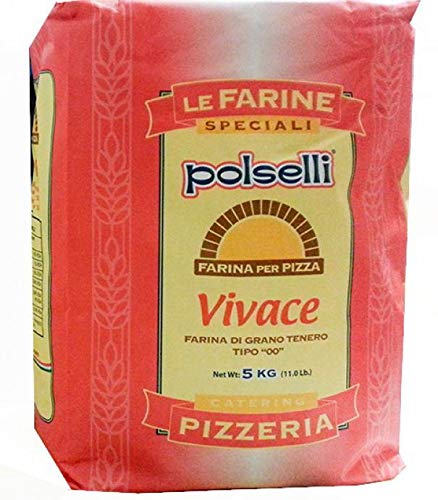 Antimo Caputo’s Manitoba flour is made from a particular type of wheat grown in Canada and the United States that has a high protein content. Mostly, Manitoba flour is usually used as high-protein bread flour, but it also works well in pizza dough as those proteins help develop a high gluten content during leavening. 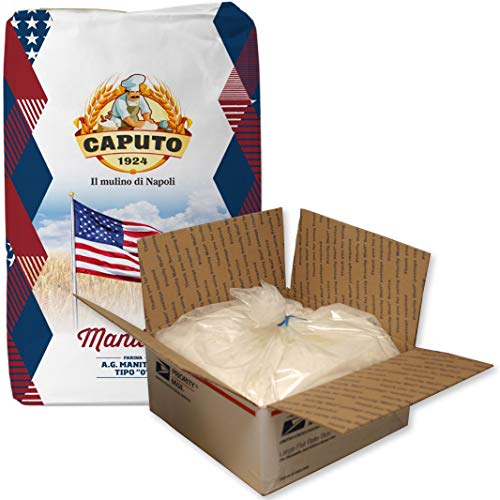 You don’t get much more traditional than Polselli’s Roman pizza flour. Polselli is a third-generation family business based in a small town near Rome, and their ‘super’ artisan flour is milled from the most refined wheat they produce. Like the Vivace All Natural, this flour is unbleached and GMO-free, perfect for all-natural Roman-style pizza dough. 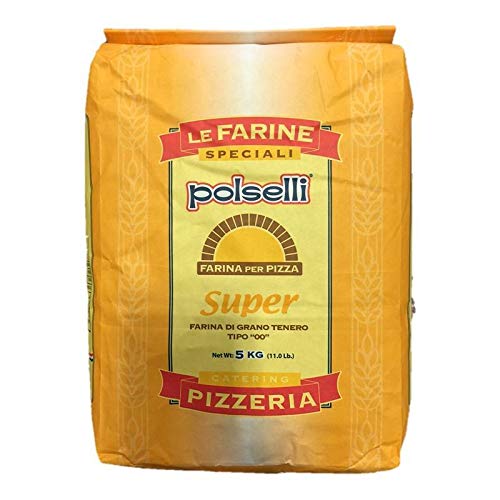 Made from 100% all-natural Durum wheat, Herbala’s Fine Semolina Flour is exactly what you need if you want your pizza dough to have a little more crunch. The added gluten content in semolina flour will also give you a more forgiving dough that’s less likely to tear. 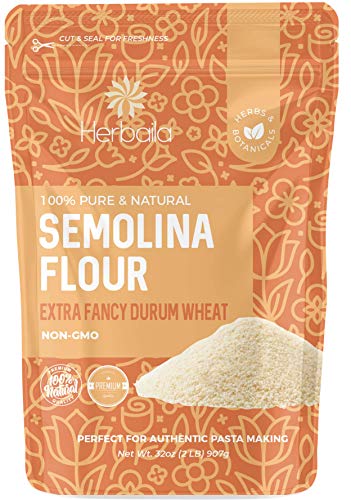 When it comes to making pizza with all-purpose flour, a name you’ll see come up, again and again, is King Arthur. A favorite of pizza makers in the US, King Arthur’s 100% Organic All-Purpose Flour is USDA approve, unbleached, and does not contain potassium bromate. The extra gluten in all-purpose flour means you’ll get a springy dough with a chewy texture. 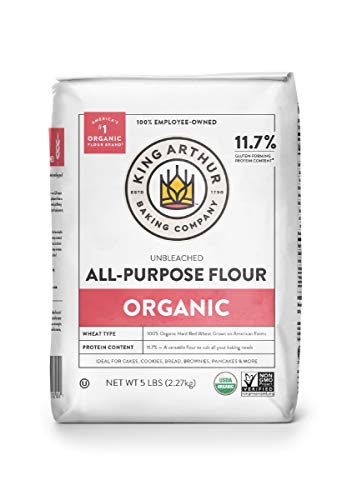 If you suffer from a gluten intolerance but love pizza, then Antimo Caputo’s Gluten-Free Pizza Flour might be the perfect workaround. As we mentioned above, you need to add a few things to gluten-free flour in order to mimic the gluten development that is so important to good pizza dough. The addition of guar gum, vegetable fibers, and dextrose in the pizza-specific flour mix is the closest you’re going to get to perfect gluten-free pizza dough. 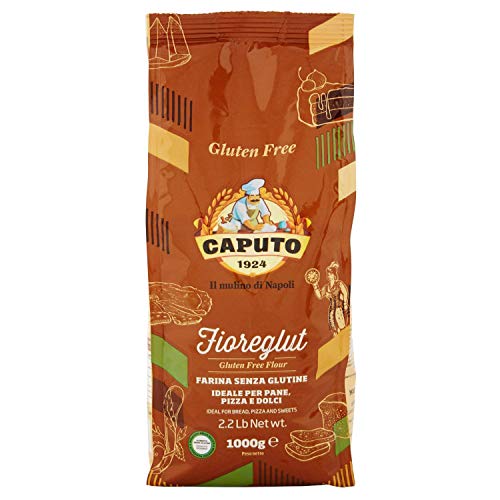 If you want to make your own pizza dough, but still aren’t sure which flour you need to use, we’ve written a short guide to bring you up to speed.

What makes a good flour for pizza dough?

Good pizza dough has to have a few specific attributes. It should have that iconic chew that makes it a pleasure to tear into but still be light enough to puff up at the edges of your pizza to give you a distinct crust. The secret to hitting all of those marks is gluten development.

Why gluten is so important

Gluten is a protein that is found in wheat that, when combined with moisture, becomes elastic. That elasticity is what gives pizza dough its characteristic springiness and creates the chew in your pizza crust.

Getting the right level of gluten is essential. Too much and the dough will be too heavy to rise, and you won’t get a good crust. Too little and you dough will be difficult to work, and your pizza base will be brittle rather than chewy.

Most of the flours we’ve suggested today have a higher gluten content, which is vital to your pizza dough’s stability and texture.

Which type of flour is best for a deep-dish pizza base?

Deep-dish or Chicago-style pizzas are a hard contrast to traditional Neapolitan-style pies. Significantly deeper, with a much larger amount of topping and pizza sauce then labeled on the top, deep-dish pizzas are sufficiently different from thin-crust pizzas to require a slightly different dough mixture.

The dough for a Chicago-style pizza is a dough-pastry hybrid. The secret ingredient here is fat, generally in the form of butter of oil, which coats the flour and repels moisture, keeping it from going soggy. Because deep-dish pizzas cook for longer at a lower temperature, the more refined 00 flour isn’t the best idea.

All-purpose flour and semolina flour are better options because they have that all-important high-gluten content, but their coarser texture works better as part of the dough-pastry hybrid and give the dough the additional structure it needs to create the wall of the pie.

Which type of flour is best for a crispy pizza crust?

All of the flours we’ve listed above will give you a crispy crust, but if you want some extra snap in your base, then semolina flour is the way to go.

Traditionally used for pasta, semolina flour has a high percentage of gluten proteins and is historically used to flour the bottom of pizzas to keep the base crispy.

Making your dough with 100% semolina flour will give it an extra crispy texture and an additional depth of flavor.

Can you use plain flour to make pizza dough?

The short answer here is yes, but you probably shouldn’t.

Unlike the other flours we’ve listed above, plain flour isn’t high in gluten proteins and won’t develop that characteristic stretch when leavened.

Using plain flour for your pizza will give you a dough that is difficult to work with, won’t be chewy or crispy, and has a slightly unpleasant floury taste. If plain flour is all you have to hand, you can use it, but you’d probably be better off waiting and getting one of the more suitable flours we’ve talked about above.

There’s no one right flour when it comes to pizza dough, although there are some wrong ones, and you can make excellent pizza dough from any one of the flours above. Now you know what their differences are and how using them will affect your pie’s texture, you can pick the one that works best for you!

Do you use a flour for pizza dough that we haven’t mentioned, or maybe you use a mixture of flours and would like to share your magic ratio with us? We’d love to hear about it in the comment section below.

11 Types of Pizza – How Many Have You Tried?

Pizza is, without a doubt, one of the most popular, quintessentially American foods.  So much so, that according to the National Association of Pizza Operators, we purchase three billion of them per year! With that staggering statistic in mind, why not experiment a little and try out one of the many delicious types of pizza…

How to Trim a Brisket for a Backyard BBQ

When you bring a brisket home from the shop it will almost always be covered with hard fat and silverskin. No matter how long you cook it, it will just not render, and your rub will not flavor the meat. This is why trimming your brisket is one of the most important steps. Hacking away…

Staying sharp: How to Use a Honing Steel

A sharp knife is an essential part of any chef’s equipment. Being able to cut quickly and accurately is convenient and safer than using a blunt knife, which is more likely to slip. A honing steel is a simple and easy to use tool that will help give your knives that factory fresh edge again,…

Have you ever wondered why some peppers are hotter than others?  It can be difficult to gauge which varieties of pepper are ‘hot’ and which are ‘mild’ if we don’t first determine what these criteria are. This is where the Scoville Scale can be helpful. In this guide, you will learn all you need to…

What Is the Temperature Danger Zone? Food Safety 101

There is no upside to food poisoning. At best, it will see you wasting a few days hunched over your new porcelain best friend; at worst, it can have long-term adverse effects on your intestinal health. Understanding some food safety basics like the temperature danger zone is the best way to avoid food poisoning. We’re…