When it comes to the BBQ community, liquid smoke is often shunned and derided as a cheap way to impart smoke flavor in a dish.

You could say that these criticisms are unjust, particularly when you consider that not everyone has the luxury of having access to a smoker.

The point of liquid smoke is to impart smoke flavor without actually smoking anything, so it’s a convenient way to get smoky flavor into a recipe if you don’t have the time or option to smoke something the traditional way.

Let’s take a look at how liquid smoke is made and how it can be used in everyday cooking.

What is liquid smoke?

Liquid smoke was invented by Ernest H. Wright of the brand Wright’s Liquid Smoke. As a teenager working at a print shop, Wright noticed a black liquid dripping from the stovepipe that heated the print shop he worked in.

He later became a chemist and realized that the black liquid he saw as a youth was the smoke coming in contact with cold air and condensing into liquid. Ernest conducted experiments to recreate the liquid via wood combustion and condensation of the fire’s exhaust, and thus liquid smoke was born.

Wright’s Liquid Smoke was first produced in 1895 and is still sold in stores today. The flavoring is used in all sorts of dishes adding smoky flavor without using a smoker or live fire.

How is liquid smoke made?

Liquid smoke occurs naturally when the smoke from burning wood is condensed into liquid form.

Smoke and water vapor are byproducts of burning wood, and when the water vapor – in the form of steam – comes in contact with cold air, it is condensed into a black liquid.

Modern methods condense the steam through a cooling tube, filter out the soot and ash impurities and distill into a concentrated form. This yellow-brown liquid is the liquid smoke you’ll see on sale in the grocery store

Smoke itself is a byproduct of combustion, and whether that flavor comes from actual smoking or through a liquid version, it will always have a trace amount of the organic compound polycyclic aromatic hydrocarbons – or PAHs.

In large quantities, PAHs can be carcinogenic. Extended, regular exposure to PAHs can cause long-term health effects.

The truth is the amount of PAHs found in liquid smoke is minute, and though we don’t recommend drinking straight from the bottle over a long period of time, the small amounts you use to flavor your food are basically harmless in the grand scheme of things.

Liquid smoke is used to impart smoky flavor without the actual fire, so it can be used on any dish that you want to taste like it came from a smoker.

Food manufacturers also use it as a flavor additive. By using it in their products, they’re allowed to market those products using the word “smoked” in their name. Some mass-produced cheeses marked as smoked – such as cheddar or gouda – utilize the liquid flavoring, as well as sausage products stuffed into liquid smoked-infused casings.

One of the main uses, however, is in the commercial production of sauces, marinades and most anything with the word “barbecue” in the name. Check the ingredients next time you’re out shopping.

How to cook with liquid smoke

Cooking with liquid smoke is easy. The flavor is very concentrated, so only a small bit is necessary. Just add a few drops either brushed on topically to the protein or mixed into the sauce or marinade.

If you’re finding that even a drop or two is still overpowering in taste, you can dilute the liquid smoke with a liquid of your choosing that fits the recipe.

Liquid smoke can be added to just about any recipe so long as it’s used in moderation. You can even use it in cocktails to amp up the breadth of flavor.

Recipes that use liquid smoke

As mentioned, liquid smoke can be added to a variety of recipes, not just traditionally smoked foods. Let’s explore some options.

If you don’t have a smoker, but want that quality BBQ taste of smoked meat, you’ve got to try this sous vide smokerless smoked brisket. It’s a bit labor-intensive, but the results mimic what you’d get if you smoked the brisket instead.

Don’t have a sous vide machine? Try this crock pot brisket recipe instead.

And while you can certainly add liquid smoke to your pulled pork, this smoky grilled pork chop recipe is the perfect way to create chops that taste wood-fired.

If you’re craving fish, try this salmon recipe that uses liquid smoke to enhance the flavor.

What’s BBQ without the greens? This southern greens recipe is sure to be a crowd-pleaser without touching a grill grate.

Let’s not forget about the side-dish staple mac and cheese. Turn it up a notch with this smoky version using hickory flavored liquid smoke.

Smoky baked beans round out the list of traditional BBQ side dishes. This version is simple, sweet and smoky without the fire.

Don’t neglect desserts! These recipes have an unexpected depth of flavor with the smokiness, giving an unexpected bonus to the taste buds.

This s’mores ice cream gives the authentic taste of a campfire in every bite, while these chocolate chip cookies taste just like they were baked in a smoker! The smoky flavor compliments the sweet chocolate giving a subtle rich background to the traditional sweetness.

Liquid smoke really shines in sauces and marinades. It’s subtle enough to sit in the background, but still rich enough to make its presence known.

This Kansas City BBQ sauce has all the right notes of flavor to compliment the meat, while the secret weapon in this Carolina mustard sauce is twofold: liquid smoke and beer.

If you have a sweet tooth, you can add a drop or two of liquid smoke to simple syrups to give your cocktails a hint of woody flavor.

Where to buy liquid smoke

Liquid smoke can be found near the BBQ sauce in your local grocery or supermarket. The most notable brands are Colgin and Wrights, but younger sauce brands like Stubb’s are starting to get into the mix, as well as craft makers around the nation.

If you want more choices than what your supermarket has, check Amazon for a variety of options. 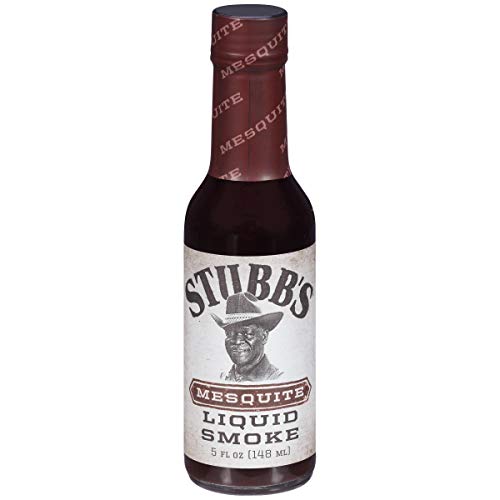 How to make your own liquid smoke

Making your own liquid smoke does have its advantages over opting for store-bought varieties. You have more control over the flavor intensity and ingredients if you’re making your own and can make sure there are no added chemicals.

To make your own liquid smoke, you’ll need a smoker or grill that you can funnel up through a chimney. Use your favorite smoking wood or a mixture of different woods to add nuance to the liquid smoke. You can soak your wood or wood chips beforehand to ensure adequate smoke.

There are some practical substitutions to liquid smoke if you don’t want to use it or don’t have any on hand.

Though liquid smoke is shunned in many BBQ circles, you can see that it has its purpose and conveniences. Sometimes it’s just not practical to fire up a big smoker just to get that hint of smoky flavor.

Culinary innovations such as liquid smoke help to evolve the industry no matter how controversial they may seem, so don’t be scared to experiment and play with flavors.

We hope this article helped to clear the air on liquid smoke. Is there a place for it in your pantry? Let us know in the comments below!

A staple of traditional Spanish cuisine, smoked paprika is becoming increasingly popular for BBQ marinades and rubs, or to simply spice up any dish that calls for a depth of flavor without too much heat.  If you’re new to smoked paprika, you may have a lot of questions. Where does it come from? What does…

How to Trim a Brisket for a Backyard BBQ

When you bring a brisket home from the shop it will almost always be covered with hard fat and silverskin. No matter how long you cook it, it will just not render, and your rub will not flavor the meat. This is why trimming your brisket is one of the most important steps. Hacking away…

An extra guest for dinner, a sudden change of plans, or maybe you just forgot to get your steaks out of the freezer on time?  We’ve all been there. Let’s take a look at how to quickly, and above all, safely, thaw out your steaks. We’ll share the best way to defrost steak in our…

What Is the Best Cheese for Pizza?

For many pizza lovers, cheese is a critical part of the pie. Whether you like it thick and stringy or crisply toasted, cheese is the final piece in the comfort food puzzle.  There is also a vast range of fabulous fromage to try, from tart goat’s cheese to rich Ricotta, and today we’ll be going…

Can Pork Be Pink and Still Be Safe?

There is a common misconception that pork can only be cooked to a dry husk in order to be safe. This can lead people to believe that if they see pink, the meat must not be safe to eat.  However, this isn’t true at all!  Pork can be cooked pink and still be safe for…