Camp Chef VS Traeger: The Head to Head

Traeger might have built its reputation on being the first company to mass-market the pellet grill, but, while they still have excellent brand recognition, their reputation for quality has taken a hit in recent years.

With Camp Chef growing a strong fan base for producing no-nonsense grills that nail the basics, we’ve decided it’s high time to put these two companies head to head.

Given Traeger’s vast range, we’ve decided to keep things fair by comparing their Pro 575 with its nearest Camp Chef rival, the SmokePRO DLX. 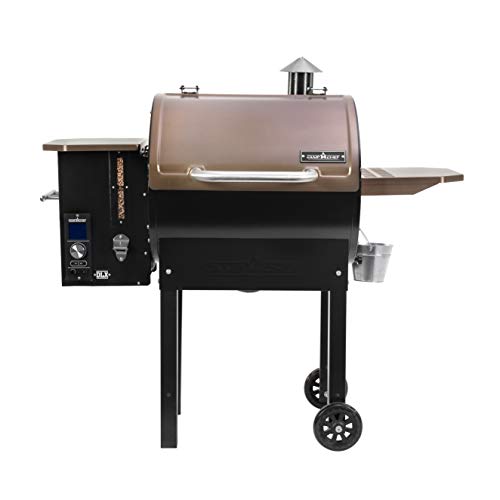 Before we get into the nuts and bolts of the grills we’re putting head to head, let’s take a little look at their manufacturers.

The first Traeger pellet grill was developed by Joe Traeger in 1985, and he would go on to patent it in 1986. This patent gave Traeger somewhat of a monopoly over supplying pellet grills, and the company remained a small family-run affair that operated through a limited number of stores.

When the Traeger patent expired in 2006, competition from other companies started to pick up, forcing Traeger to expand. Traeger outsourced their production to China in 2010, which led to a dip in quality, and a knock to their brand reputation.

Since then, Traeger has rallied, most notably producing a range of grills in 2019. These featured cutting edge technology and a level of quality that fans of the brand say is reminiscent of their early, US-made, models.

Unlike Traeger, Camp Chef cut their teeth making utilitarian and straightforward outdoor cooking equipment, starting with the well regarded Pro 60 stove in 1990. All Camp Chef products are created in the US but manufactured in China.

While Camp Chef doesn’t have the massive range of options that Traeger does, their Woodwind and SmokePro ranges have garnered a lot of attention because of their build quality and relative value for money.

Now we’ve got a better idea of the kind of reputation Camp Chef and Traeger Grills have, let’s take a closer look at the two grills we’re putting head to head.

The Camp Chef SmokePRO DLX is built with ease of use in mind.

While it might lack some of the bells and whistles, you might see on modern pellet grills, most notably the lack of WiFi, it does have some quality-of-life features that more than make up for it.

The most important is probably the exclusive Ash Cleanout system, which allows you to empty the ash from the firebox by merely pulling a lever. No more vacuuming needed.

You can also get the optional add-on of the SmokePro BBQ Sear Box, which attaches to the side of your pellet grill and gives you a cast iron searing grate with a 16,000 BTU burner that reaches temperatures up to 900º F, so searing a steak won’t be a problem.

The SmokePRO DLX also boasts an electronic auto-start ignition, Camp Chefs patented Smart Smoke Technology, and a dual LED temperature readout that shows both the internal cooking temperature and internal food temperature through the use of an included food probe.

With a cooking surface area of 570 square inches and an 18 lbs pellet hopper, the SmokePRO DLX is almost precisely the same size as the Traeger Pro 575. It weighs in at 140lbs and is 51 inches wide and 47 inches tall, including the chimney.

Using its simple temperature selection system controlled by a dial on the front, the SmokePRO DLX can hold a temperature from as low as 160º F (71°C) for smoking up to as high as 500º F (260°C) for grilling.

What really sets the Pro 575 apart from the SmokePRO DLX is the presence of its WiFIRE technology.  WiFIRE allows you to connect your smartphone to your Traeger and then monitor and adjust your grill from the Traeger app.

The Pro 575 also uses Traeger’s new Pro D2 Direct Drive to control pellet flow and, combined with the new Turbotemp system, gets the grill up to cooking temperature ultra-fast.

With 575 square inches of cooking space and an 18lbs pellet hopper capacity, there’s not much to choose from between the Pro 575 and the SmokePRO DLX when it comes to actual rack space.

The Head to Head

Now that we’ve got a good idea of the specs of these two grilling beasts, it’s time to put them head to head.

To do that, we’ll be comparing them on seven crucial factors, warranty, temperature control, pellet hopper capacity, clean out, customer service, appearance, and WiFi/app experience.

Both the Traeger Pro 575 and the SmokePRO DLX come with a three-year warranty, so there’s not much to choose between them there.

The warranties are also basically the same, offering to repair or replace any defects in material and workmanship under normal use and maintenance. This excludes paint or finish, and is voided if the damage is caused by neglectful operation misuse, abuse, overheating or alteration.

Unfortunately, the Traeger Pro 575 has developed a bit of a reputation for its Pro WiFire Controller not being able to hold a consistent temperature. The stated temperature of the Pro Controller is +/- 10º F, but many customers have reported temperature swings that are much larger than that.

Added to this issue is the fact that, across the range, Traeger controllers have different temperature variances.

By comparison, the Camp Chef temperature controllers offer a range of +/- 10º F across their range, which, while it isn’t fantastic, is at least consistent.

They also include the Smart Smoke Technology, which gives you the Lo Smoke and Hi Smoke setting. These options increase the temperature variance to +/- 15º F but also increase the amount of smoke produced.

Overall, the SmokePRO DLX, and the Camp Chef range as a whole, seem to have more consistent temperature controllers and greater utility with the Smart Smoke settings.

Both models have a capacity of 18lbs, which doesn’t leave much room to choose between them, but the Traeger Pro 575 has the benefit of their new Pro D2 Direct Drive.

The Pro D2 Direct Drive has an industry-first brushless motor, which means it wears out slower, and the Turbotemp, which increases the number of pellets to compensate for the lid being open and gets the grill up to temperature faster.

The Pro D2 also has a pellet jam solution that reverses the auger drill to try and remove any jammed pellets, which is a common issue with pellet grills.

The addition of the Pro D2 Direct Drive, which is only seen on seven of Traeger’s grills, definitely tips this section in favor of Traeger. By all accounts, the Camp Chef’s hopper and pellet feed setup works perfectly well, it just lacks some of the utility of the Pro D2 Drive.

Camp Chef and their SmokePRO DLX take this one hands down.

What puts some people off buying a pellet grill is that they are messy to clean out, especially in comparison to a gas grill or an electric smoker.

The new Easy Ash Cleanout System lets you simply pull a lever and it empties all the ash and unburned pellets into a small burn cup on the bottom of the machine, which you can just empty out. Quick, easy, and absolutely ideal.

There’s really not much to choose from when it comes to the appearance of the SmokePRO DLX and Pro 575, with their designs being very similar. The only significant difference is that SmokePRO DLX has color options, coming in both bronze and black.

Out of the two grills we’ve chosen to review, only the Pro 575 is WiFi-enabled. Using Traeger’s proprietary WiFIRE system, the Pro 575 can be connected to the Traeger Grillguide. This means you can monitor and control your grill on the move.

The upside of this is that you don’t have to physically babysit your grill, you can make temperature changes on the fly. Also, the Grillguide app comes with utility in the form of step-by-step cooking instructions and alerts for over 1,500 recipes.

The downside is, as we’ve mentioned, the number of customers reporting issues with the temperature variances and sudden temperature fluctuations. That being said, if WiFi is on your wishlist, the SmokePRO DLX does not have it, so the Pro 575 wins this round.

One of the common complaints about pellet grills is they don’t get hot enough to sear meat properly. Camp Chef has addressed that issue with the SmokePro BBQ Sear Box.

The Sear Box attaches to the side of your Pro 575 and provides you with a 16,000 BTU burner that will quickly get up to temperatures up to 900º F (482°C) to ensure you can get the perfect sear, or perfect reverse sear, every time.

Of course, the Pro 575 and the SmokePRO DLX aren’t the only grills on the market. So, if neither of them floats your boat, here are some other options that have caught our attention recently.

If you really want a Camp Chef but can’t live without WiFi then you could always opt for the Woodwind WiFi 24.

Larger than the SmokePRO DLX, the Woodwind WiFi 24 offers 800 square inches of cooking area and four stainless steel meat probes. It is compatible with the Camp Chef Connect App, and can use the Slide and Grill Technology’s Direct Flame mode to reach temperatures of up to 650°F (343°C).

We’ve reviewed the Pit Boss range of pellet grills before and were impressed with their quality and the bang you get for your buck.

The heavy-gauge steel Pit Boss 700FB offers you plenty of cooking area with 700 square inches of rack space and temperature range that runs from 180°F (82°C) to 500°F (260°C) controlled by a PID digital control board.

Optionally, you can extend the 700FB with a side shelf and even a lower cabinet (sold separately). The700FB doesn’t have a lot of bells and whistles but, much like the rest of the Pit Boss range, its study, well made, and good value. 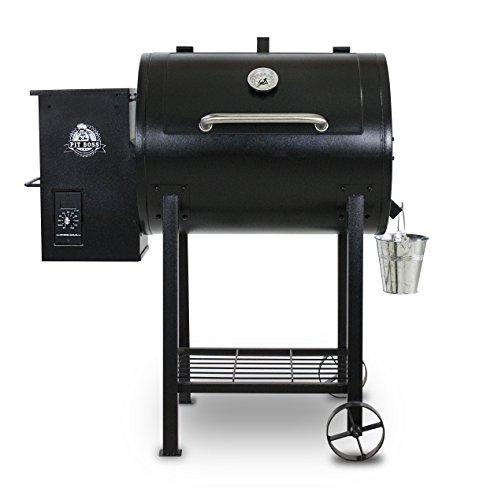 Wrapping it all up

The SmokePRO DLX might not have WiFi, but the new ash cleanout system and the options sear box more than make up for that.

Traeger, for their part, has really pushed to rehabilitate their reputation with the 2019 range of grills, and the Pro 575 is an excellent cooker that is only slightly let down by some temperature control issues.

If you’ve used either of these grills and want to share your experiences with us, or have some advice on getting the best out of them, we’d love to hear about it! Drop us a line in the comments, and don’t forget to show some love by sharing this review.

The Best Tabletop Grills in 2019

No one wants the hassle of trying to drag a regular grill to a campsite or park for a cookout. Thankfully, tabletop grills are a

For most people Easter means the beginning of spring. For us it means barbecue season is finally upon us. Large family gatherings are a great