Lid up VS Lid Down When Grilling

Have you never known exactly what to do with your grill lid? For most people grill up or grill down isn’t something they even think about.

You just grill the way you learnt how.

But the simple question “lid up or lid down” doesn’t have a simple answer. Read on to find out when to grill with the lid up and when to close it up.

We’ll even get into a bit of controversy where even the pros can’t agree.

What does the grill lid actually do?

As unassuming as the lid may seem, it’s actually one of the most important features on your grill.

Remove the lid, and your grilling 100% directly. None of the heat is trapped in the cooker, so only the surface facing the heat gets cooked.

With the lid on, heat is distributed throughout the cooking chamber and all sides of the meat will cook.

Some would lead you to believe that cooking without a lid is a cardinal sin, and no self respecting home griller would dream of it. But we don’t think this is necessarily the case.

It is a case of knowing when to leave the lid on, and when to go without it.

Let’s have a closer look at what to do with the lid when cooking with these different types of grill.

Heat will escape every time you lift the lid on a gas grill. As a result, when cooking with gas, leaving the lid on is generally going to be the most effective way to cook.

This heat loss is not going to matter quite so much when you are cooking thin steaks or burger patties which need to be grilled directly anyway.

The two main ways heat is transferred to your food when grilling with the lid up are radiation and conduction.

When cooking lid off with gas, the radiant heat coming off the lava rocks or briquettes in your grill is absorbed largely by the grates. Your food is cooked with this heat moves from the grates to the food via conduction.

This means that only the surfaces of your food which touch the grates or pick up some of the radiant heat from the lava rocks and briquettes will be cooked.

Here are some points to keep in mind when grilling with the lid up on a gas grill:

As we have discussed, in most instances it’s best to grill with the lid down when using gas. This is largely due to the sheer amount of heat that you lose every time you open the lid.

When you keep the lid shut, you create an environment in which you can cook using convection.

Convection cooking is when heat is transferred to your food via another medium such heated air or water.

In the case of your grill, the convection cooking occurs as the hot air trapped in the cooking area moves around your food and heats it from all sides. This is the same way an oven works.

Another way this method might be described is ‘indirect cooking’. Due to the heat lost when you open the lid, you simply cannot cook indirectly with the lid up.

This method of cooking lends itself to thicker cuts of meat where an even distribution of heat will result in properly cooked food, all the way through.

Charcoal Grills – grilling with the lid up

This is where it gets confusing.

When you leave the lid off a charcoal grill, the temperature is going to soar. This is because the coals now have access to huge amounts of oxygen.

Of course, a lot of this heat is going to be lost, but the heat that hits the surface of the meat is going to be intense. This means that you will get nice brown exterior which is a result of the malliard reaction.

Again, this type of grilling method is best when you are cooking thin cuts of meat that you don’t want overcooked on the inside.

Charcoal Grills – grilling with the lid down

The key to controlling the temperature on a charcoal grill with the lid on lies in managing the vents. Open up the vents and you can get the temperature cranking, allowing you to cook using both direct and indirect heat.

This being the case, cooking over charcoal with the lid down can work for grilling, baking and a mix of direct and indirect cooking.

To grill, open all the vents and spread the coal evenly under the cooking grate. You will need to be vigilant when flipping the meat.

To use both direct and indirect cooking, open all vents. Push all the coals to the one side of the cooking area, and put a drip tray filled with some water on the other side.

Place any food that you want cooked at high temperatures over the coals, and when you want to finish off the cooking with indirect heat, slide it over to sit above the water tray.

Lid up vs lid down controversy

We have taken a neutral stance in this article and highlighted the pros and cons involved in each method so far. But the is controversy surrounding whether you should be taking the lid off is intense.

Let’s have a closer look at both points of view in more detail.

Weber are not fans of grilling with the lid off. Here is a what they have to say about it:

“Barbecuing without a lid means that you lose heat and all that lovely smoky flavor disappears into thin air.

Cooking the Weber way, with the lid on, allows the food to cook evenly, the temperature is controlled and you don’t risk scorching your food with flare-ups.

We recommend you always cook with the lid on. It helps the heat to circulate evenly and seals in that smoky flavour we all love. Food stays succulent and no heat is lost, so it cooks quicker too.”

Weber basically feel there is no situation in which you cannot get the same if not superior results with the lid on as with it off.

In other words, there is no reason you should ever grill with the lid off. They go so far as to call grilling with the lid on “the Weber way”. They really back this method.

Weber also point out that the risk of flare ups is reduced when the lid is left on, which is a safety issue worth considering.

Meathead Goldwyn of amazingribs.com begs to differ. While he by no means thinks you can go roasting whole chickens with the lid off, he does think there are times lid off is better. He states his case this way: 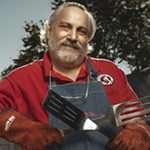 Meathead Goldwyn, When To Put A Lid On It

Leave the lid off when you are cooking thin foods like or skirt steak. Without a lid, all the heat comes only from underneath. One side cooks, the other does not.

For something like skirt steak we want a dark exterior loaded with the compounds formed when proteins, amino acids, and sugars undergo the Maillard reaction

But you don’t want the interior overcooked. If you close the lid, heat attacks from above and below, and the bottom gets nut brown, but the top just gets to tan, and the center overcooks.”

He goes on to explain that when you are grilling food like shrimp or sweet food like pineapple where it can burn quickly and you need to judge the color, you should leave the lid off.

His rationale is compelling, as the amount of time a pineapple can be left on the grates before it descends into a black sticky mess hardly warrants the time it takes to put on the lid and check the vent settings are all good.

As far as cooking thinner cuts of meat, it might be up to you to test out Meatheads claim that leaving the lid down will lead to an overcooked middle.

To sum it up

Nobody wants to feel judged when grilling. So it is important that you have your story straight as to why you sit in the “lid off” or “lid on” camp.

There are compelling points on both sides, and ultimately it is up to you to weigh up the evidence, do a few trial runs and then back yourself when you grill.

We hope you have enjoyed this article and that you have found it full of useful information to guide your grilling decisions.

If you have any further questions, or information that you would like to add that has not been covered in this article, be sure to leave us a note in the comments section below. And if you found this article useful, please be sure to share! 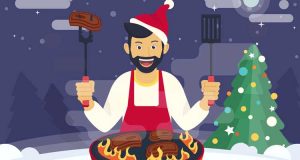 After a gift for the pitmaster who seems to have it all? You are at the right place. Or maybe you’re just sick of getting 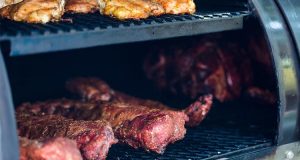 How to Use an Offset Smoker

Offset barrel smoker. Stick burner. Horizontal smoker. Whatever you call them, this is the type of smoker that dominates the competition circuit. And there’s no