Pink butcher paper has transitioned from something your favorite local butcher wraps your pork chops in, to the must-have BBQ accessory of the last couple of years.

If you’re a little confused about all the hype around some paper, don’t worry!

In this article, we’ll be breaking down precisely what pink butcher paper is, what it’s used for, why it’s a popular alternative to foil, and where you can pick some up from.

Why are barbecue enthusiasts obsessed with pink butcher paper?

Before we get into why pitmasters have started raving about pink butcher paper, we should get a better idea of exactly what it is.

Pink butcher paper is thick paper with added “sizing,” which is an internal treatment that increases the strength of the paper when it is soaked in moisture. 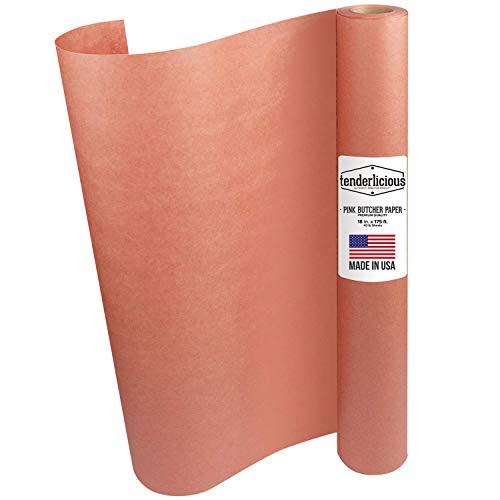 Adding sizing to an already thick and robust sheet of paper means you can wrap raw meat in it and it won’t turn into a papery slush as you carry it home.

So when do I use it?

When it comes to using it to BBQ, pink butcher paper comes in handy as an alternative to the aluminum foil traditionally used to wrap meat.

Pitmasters generally wrap meat like brisket in order to prevent it from losing moisture towards the end of the cooking period. This helps to keep the meat tender and juicy.

Unlike foil, Pink butcher paper lets the meat “breathe” a little, letting some of the moisture escape to prevent the meat from getting mushy and letting more of the smoky flavor in.

You can also use pink butcher paper as part of a “Texas Crutch,” which involves wrapping meat to prevent evaporative cooling in order to avoid the dreaded BBQ Stall.

Wrapped meat also cooks faster, which is handy if you need to produce a   smoked brisket on a tighter schedule.

Wrapping your rack of ribs or brisket can slow down the development of a bark on the outside of the meat. This can come in very handy if they’ve cooked a little too quickly and you are worried that your crust might get too dark.

Be wary of wrapping your meat too early, as this can prevent it from developing a crust at all.

Why use butcher paper instead of foil?

The primary reason that pink butcher paper has become more widely used amongst the BBQ crowd is, when it comes to wrapping meat, it has certain advantages over aluminum foil:

Why is it suddenly so popular?

A big chunk of the reason that pink butcher paper has become so ubiquitous is because of the James Beard Award-winning chef and owner of FranklinBBQ, Aaron Franklin.

Aaron’s restaurant has become famous for the quality of the BBQ it produces and the length of the line you have to stand in, in order to get a taste of that BBQ.

In the trailer for Aaron Franklins Masterclass you can see him using butcher paper in nearly every scene.

At FranklinBBQ, Aaron wraps his coveted briskets in pink butcher paper, a tradition stretching back through his mentor John Mueller to Louie Mueller, John’s father and owner of the iconic “cathedral of smoke,” Louie Mueller Barbecue.

As word spread around about Aaron’s amazing BBQ, people picked up on his use of pink butcher paper and started using it themselves.

The world of barbecue can be quite a trend driven one. If people see someone they respect, they start following and pretty soon everyone is doing it.

What is pink butcher paper exactly?

To get precise for a moment, pink butcher paper is made from FDA approved, 100% food-grade virgin Southern Pine pulp.

The paper is pink in color because it isn’t bleached, unlike the more traditional white butcher paper you’ll find in most local butchers.

Steak paper is very similar to pink butcher paper, but there are several critical differences.

Steak paper is thicker and heavier than butcher paper because it is most commonly used for meat storage or display.

If you’re looking for pink butcher paper, don’t buy steak paper by mistake. It’s a different product entirely and won’t give you the results you are looking for.

Technically, peach paper is a particular form of steak paper, so be careful that the product you are buying is definitely the thinner pink butcher paper.

To put an odd rumor to rest, no it doesn’t contain any form of peach extract or use peach wood as a base.

Where to buy Pink Butcher Paper

Everyone’s favorite world-spanning mega-company also offers a range of FDA-approved Pink Butcher Paper alongside a range of other brands all offering food-grade, unbleached, unwaxed, uncoated rolls of butcher paper for you to choose from.

Because of its meteoric rise in popularity amongst pitmasters, pink butcher paper is now far more widely available now that it was just a few years ago.

There is a good chance that your favorite online BBQ shop sells individual rolls and, if they don’t, you’re only a quick search away from someone who does.

Regardless of what brand you choose, remember to look for FDA-approved food-grade paper and make sure that anything marketed as “peach paper” is actually pink butcher paper and not just peach-colored steak paper.

So there you have it. Pink butcher paper is a handly alternative to foil that reduced the downsides to wrapping meat during or after cooking.

Unlike foil, using pink butcher paper lets moisture escape, preventing over steaming, while still protecting the meat from the full impact of the smoker.

Its current popularity probably has more to do with Aaron Franklin than any magical brisket tenderizing effects, but it does still have its place in a pitmaster’s toolkit.

A Guide to the Most Expensive Steak Cuts

They say that money can’t buy happiness. Whoever believes this has clearly never bitten into a perfectly cooked $250 A5 Kobe steak. So, we’re going

The best way to cook a nice thick steak is with the reverse sear method. This process involves slowly cooking the steak at low temperature