When it comes to steak, certain cuts tend to take the limelight.

Everyone has heard of the headliners like the ribeye, New York strip, tenderloin, and sirloin, but they only represent a small proportion of the meat you can get from a well-fed steer.

Adequately prepared, lesser-known cuts like skirt steak and flank steak can more than rival the stars of the steakhouse menu, without breaking the bank.

Flank and skirt are often used interchangeably, mainly because they are superficially similar and people aren’t sure about the differences between them.

So, in this article, we’ll be looking at the difference between the skirt and flank steak and the best ways to prepare them.

What’s the difference between skirt steak and flank steak?

Both the skirt steak and flank steak are long strips of meat taken from parts of the cow that do a fair amount of work during the lifetime of the animal. The skirt steak is the cow’s diaphragm muscle, and the flank steak comes from the abdomen

Both cuts are lean compared to steaks like the ribeye or tenderloin and have a pronounced beefy flavor. Because both cuts contain a lot of hard-working muscle, they can be quite tough if prepared incorrectly.

While the fact that flank steak is a little more tender than skirt steak means it does better on the grill, it is still at its best when marinated.

Choosing between skirt steak and flank steak is more about picking which cut is right for the dish you are creating.

Skirt steak should be your go-to choice for dishes like fajitas, bibimbap, or a Philly cheesesteak, where the marinade can help to take some of the chew out of the meat, and that bold, beefy flavor adds depth to the dish.

Flank steak, on the other hand, still has that excellent beefy flavor but is tender enough to be cooked hot and fast or rolled and stuffed. It makes a great base for Carne Asada or Korean bulgogi.

What is Skirt Steak?

The skirt steak is a thin and fibrous piece of muscle that separates the chest of the steer from its abdomen and acts as its diaphragm muscle.

Because it sees a lot of use while the cow is alive, the skirt contains a fair amount of tough muscle fiber, which can give it a pleasant chew when cooked well or turn it into an everlasting gobstopper if poorly prepared.

Other names for skirt steak

Skirt steak is sometimes known as Romanian tenderloin, Romanian steak, Philadelphia steak, or Arrachera, but these names are most commonly used outside of the US.

How to cook skirt steak

Because of its fibrous texture, a good strong marinade is skirt steak’s best friend.

The best marinades for skirt steak tend to be the ones with the right amount of acid in them, that’s why the best Fajitas are always loaded with lime juice.

Marinade your skirt steak for around 6 to 12 hours in a marinade that heavily features fruit juice, vinegar, or some other form of acid.

Don’t overdo it on the marinating time, you want to skirt to be tender, not mushy.

After being marinated, slice your skirt steak as thinly as possible and cook hot and fast until rare or medium-rare.

What is a Flank Steak?

The flank steak comes from the abdomen of the steer and is part of a group of muscles that are used when the animal twists and walks, which means it sees a lot of use.

Flank tends to be broader and flatter than skirt steak, with bright red coloring.

Flank is also leaner cut than skirt with really obvious long muscle fibers running through it. It has the same rich beefy flavor as the skirt and takes to a marinade just as well.

Unlike skirt steak, it works well on the grill and can be tender and juicy if cooked properly.

The flank steak is often sold as the London Broil but can also be found as the Jiffy steak and the Bavette steak.

How to cook flank steak

While all the advice we gave on marinating for the skirt applies just as much to the flank, this cut can be grilled or rolled and stuffed for exceptionally tasty results.

If you aren’t marinating it, cook you flank steak on the hottest grill you can for the shortest time you are comfortable with.

The muscle grain on this cut is distinct, so cut across the grain and hold your knife at a 45-degree angle to get the widest slices possible.

Where to buy flank and skirt steak?

These are both somewhat specialty steak cuts and won’t be available at all supermarkets.

You can ask your butcher, or order from a specialist online butcher and get them delivered.

We always recommend the meat from Porter Road for their reasonable prices and high quality meat delivered anywhere in the continental United States. 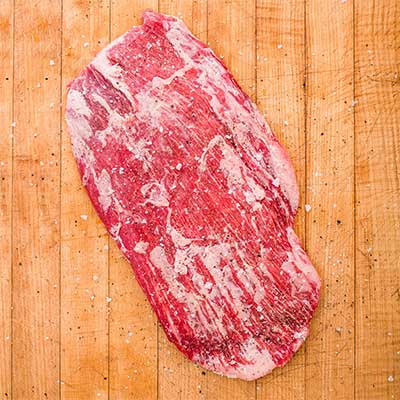 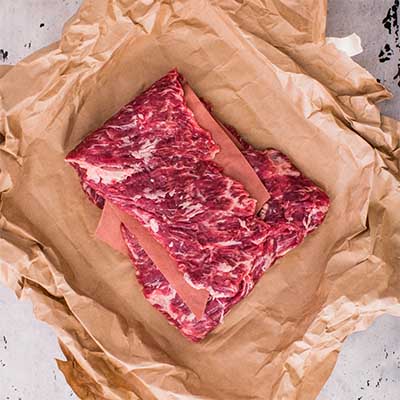 The meat from Porter Road sells out fast, especially the more rare cuts so you might need to check back a few times to get your order in.

What about Hanger and Flatiron Steak?

The hanger and flatiron steak are both commonly confused with skirt and flank steak cuts.

The hanger steak is a section of muscle that “hangs” between the tenderloin and the rib, hence the name.

This cut is often called the butcher’s steak because there is only one per animal and butchers wisely tended to keep it for themselves.

Because the hanger just stabilizes the diaphragm and isn’t involved in moving it, it is a surprisingly tender piece of meat. You’ll often find hanger steak on steakhouse menus as the base for steak frites.

Until around 2007, the flatiron didn’t really make the cut when it comes to steaks because of the large vein of thick, chewy connective tissue that runs down its length.

In 2007,  food scientists developed a new technique, similar to filleting fish, to remove that stip of connective tissue and create a tender cut that makes an excellent alternative to the New York Strip.

The hanger steak is sometimes sold as the hanging tender or the onglet in French restaurants.

The flatiron is sometimes referred to as the petite tender or the top blade steak.

How to cook hanger and flatiron steak

Both the hanger and flatiron steak are surprisingly tender pieces of meat from an area of the cow filled with tough muscle.

The hanger is essentially a budget alternative to tenderloin, and the flatiron makes a suitable replacement for the Strip Steak.

Both cuts respond best to being well seasoned and then cooked hot and fast to a medium-rare over a screaming hot grill or smoking skillet.

The flank and the skirt are excellent examples of cuts of beef that most people aren’t familiar with, which, when used in the right recipe, can produce fantastic results.

They do take a little more effort to prepare and are a little less forgiving of cooking missteps than your standard ribeye, but they are worth the effort for that amazing beefy flavor and meaty chew.

The hanger and flatiron are cuts that are slowly becoming more popular, providing less expensive options to traditional steakhouse favorites without compromising on the taste or tenderness.

Do you have a fantastic recipe that you always use flank or skirt for? Maybe you’ve got the perfect cooking technique for a hanger and flatiron steak?

If you do, we’d love it if you’d let us know in the comments below and, if you enjoyed the article, use the sharing buttons to share it with other steak-lovers. 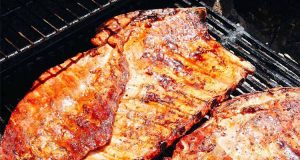 How to smoke on a gas grill

Like many of you, I first learned how to smoke meat on a basic gas grill. I used it to smoke foods like ribs, chicken,

I’ll be honest. When I first got into barbecue I had no idea there were different types of pork ribs. It wasn’t until I started