What is Pork Cushion?

Pork is one of the most widely eaten meats worldwide, but despite its popularity, some pork cuts remain a mystery to the general public – like pork cushion.

We’ll explain all about the pork cushion, where it comes from on the pig, and why you may want to consider it for certain recipes.

What is pork cushion

Pork cushion is a deboned piece of meat cut from the anterior side of the picnic shoulder. It is a lean, well-worked muscle with lots of flavor.

If you’re smoking the meat, you can treat the pork cushion as you would a Boston Butt. Be sure to keep an eye on the internal temperature as the cushion cut is generally smaller in size than the butt and will cook faster.

Pork cushion is similar to the butt in that they’re both derived from the foreleg of the pig. Pork cushion itself comes from the picnic shoulder – which sits directly below the butt.

The pork butt is very well marbled with quality intramuscular fat due to the fact that it’s not an overly utilized muscle on the animal.

The pork cushion, however, is a heavily worked muscle. This results in a more dense, tougher piece of meat with less intramuscular fat.

Both pieces lend themselves to low and slow methods such as braising, stewing, roasting or smoking. The pork cushion may need to cook to a higher temperature than the pork butt to be able to truly pull apart, so 200°F – 205°F should do the trick.

Looking to buy a fresh cut of pork? Check out how you can order meat online and get it delivered right to your doorstep.

One of pork cushion’s best qualities is its versatility in cooking methods. We’ve already discussed how low and slow will result in succulent pulled pork, but the pork cushion can be used in many other recipes as well.

Because of its density and toughness, the pork cushion works well when sliced into individual chops.

If you pan fry the chops as is, however, they’ll be flavorful but chewy. This is because the marbling and connective tissues won’t have a chance to break down when cooked so fast, so to combat this you’ll need to tenderize the meat.

You can also cook pork cushion as you would a roast beef or standing rib roast. Relatively easy in prep time, it’s another low and slow method, but at a higher cooking temperature than you would use for smoking or barbecuing.

This herb-crusted pork roast recipe takes only about 20 minutes to prep before it goes in the oven to cook, allowing you to focus on other things like preparing sides, or entertaining. Just substitute your pork cushion in the recipe.

For pork cushion roast, cook for 35 to 40 minutes per pound, and make sure the internal temperature is at least 145°F.

Slice and serve on a platter for a nice presentation on any special occasion or for an easy (but impressive) Sunday dinner.

There’s bound to be leftover pork roast, so you can cube it up and mix it into an easy pork stew. This is an economical way to make sure all ingredients and leftovers are put to use and waste is minimized.

For a thick, hearty stew, simply add vegetables and broth to your leftovers and let simmer or put in a slow cooker, but to take it up a notch try this classic pork stew recipe that really lets the flavors meld together.

With the popularity of noodle shops on the rise, leftover pork can be used to satisfy your ramen cravings. Home-made ramen is punched up with pork in this easy pork ramen recipe. Since your pork is already cooked, this recipe will fly by.

Ramen not your thing? Try stir-fry instead.

We hope this article taught you all you need to know about pork cushion as well as how it relates to other cuts. It’s a versatile cut of meat that you shouldn’t shy away from if you find it at the grocery store.

If you can’t find it off the shelf, show off your pork knowledge to the local butcher by ordering one. Then show off to your friends and family with a perfectly cooked meal.

Growing up in a multicultural home allowed me to experience a wide range of cuisines. Smoke and fire tied everything together, and barbecue became the common denominator. Now, I get to experience great food every day writing and experimenting with the varying techniques and cooking styles out there. 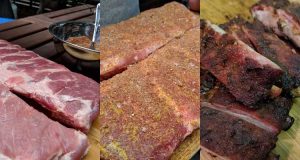 How to Prepare and Cook Barbecue Pork Ribs

Every backyard pitmaster wants to master barbecue ribs. There’s something magical about ribs that makes people dedicate their whole lives to perfecting their recipe. There 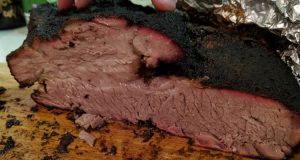 Mastering barbecue brisket is a badge of honor for the home pit master. It’s not about finding the perfect recipe either. By learning the right