Do you love the idea of cooking and relaxing outside during the summer but find yourself wilting under the combined heat of the sun and the grill, scurrying for air-conditioned safety when you’d rather be outdoors?

A good misting fan will help you keep your cool, no matter how high the mercury climbs, and, as usual, we’re here with a breakdown of some of the best models on the market.

We’ve chosen the RYOBI as our best overall misting fan because of its utility. As well as the standard hose attachment, this fan comes with a special foot that allows it to pull water from a 5-gallon bucket. 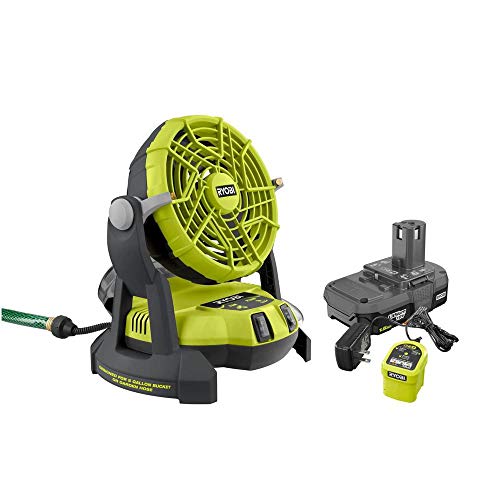 This means you can use it without a water hookup, so you can take it camping, to the beach, the pool, or just anywhere you need a little extra cooling.

The fan itself runs on a Ryobi 18-Volt One+ battery, which is compatible with other Ryobi products.

If you’re going to be spending the day somewhere really hot and want to have it on Hi for longer periods, it’s probably a good idea to invest in a spare 18-Volt battery.

At 7.6 lbs and measuring 15 x 12 x 13 inches, the RYOBI is small and light enough to be properly portable but powerful enough to take the sting out of even the hottest days.

If you’re lucky enough to have a dedicated outdoor cooking and relaxing area and want a way to cool it down without having to stack 5-gallon buckets in the corners, then this fixed position fan by Hydromist might be precisely what you’re looking for. 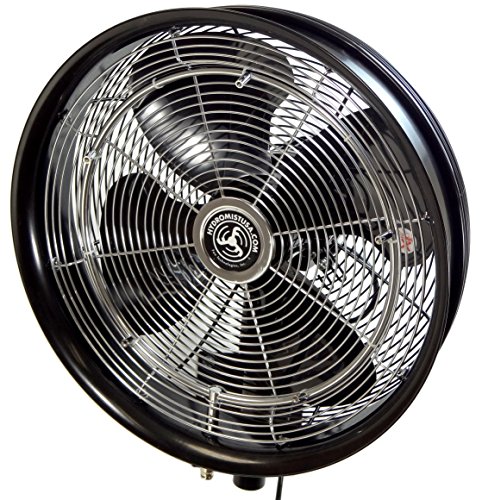 This 3-speed fan comes with a wall mounting bracket and connects to your water supply via a ⅜-inch high-pressure hose, making it ideal for residential use.

While the fan can be connected to a water tank or even a bucket, you’ll need a 1000-psi pump to move the water through it.

This lack of an internal pump, combined with the fact that it weighs nearly 28 lbs, means it’s not really portable, and if you’re looking for something to take to the beach, you’d be better off with the Arctic Cove.

However, if you’re looking to cool the area around your built-in grill or that sweet backyard bar you’ve built, this is precisely the fan you need.

The Ecojet wins our pick for the best wall-mounted misting fan because of the innovative and low-maintenance way its misting function works.

Most misting fans use spray nozzles that spray a fine mist of water in front of the fan. Those nozzles can get clogged, particularly in areas where they use hard water, and can be challenging to clean, especially if the fan is wall-mounted and out of arm’s reach.

The Ecojet creates its mist using a spinning disk mounted in front of the fan, so there are no fiddly nozzles to get clogged.

The ultrafine mist produced by this system can cool the air by as much as 20 degrees, and the fan covers an area of up to 1,500 square feet.

Powered by a 110-volt motor, the Ecojet plugs straight into a standard outlet, and, despite the power of the fan, the noise levels don’t go above 67dB. Water is supplied by a ¾-water hose (purchased separately) that can be connected directly to an outdoor tap.

The main benefit of the WindChaser is that it can serve dual duty as both an indoor and outdoor fan.

The four misting nozzles can be fed through a connection to a standard garden hose and, combined with the 16-inch-diameter four-blade oscillating fan, can cool the air by as much as 25°F.

The sturdy construction of the WindChaser is both rust and UV resistant, so it won’t suffer from being used outdoors.

The motor is shower-proof, so you don’t need to be worried about the mist blowing back over it, but it should be kept out of the rain.

If the day isn’t quite hot enough to warrant the use of the misting function, or you want to use it indoors, the WindChaser works perfectly well as a 3-speed indoor oscillating stand fan, making it useful throughout the year.

One of the things that put some people off purchasing a misting fan is a concern about mixing water with electricity, especially if you want to leave the fan unattended. 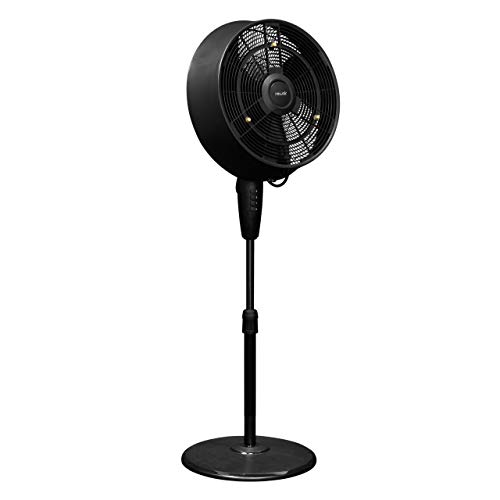 The NewAir AF-520B is a versatile and lightweight oscillating pedestal fan that solves those issues by including a GFCI plug and built-in water cut-out that work together to cut the fan off from both the electricity and water supply if it develops a fault.

In addition to these extra safety features, the AF-520B’s powerful fan provides around 500-square feet of misting coverage that cools the air by as much as 15°F.

The fan uses a standard plug connection and 0.75-inch garden hose attachment, so the AF-520B is easy to set up and, because you can adjust both the height and tilt, lets you easily get that 500-square feet of cooling air and mist exactly where you want it.

How do misting fans work?

As anyone who lives in a hot country will tell you, a fan on its own can only do so much to cool the air. Most fans work by moving air around the room, creating a wind-chill effect that allows the sweat on your body to evaporate faster, making you feel cooler.

They do not actually cool the room at all.

There is a common misconception that this is also how misting fans work; by spraying you with water, which evaporates off you like sweat. However, this would just leave you dripping with water all the time.

How misting fans actually work is by taking advantage of an effect called flash evaporation. When the fan sprays the water into the air, it does so in the form of a fine mist. This fine mist evaporates much faster than water droplets, completely disappearing before it reaches your skin and drawing the heat out of the air as it does so.

This is why, depending on the fan’s size and the fineness of the mist produced, misting fans can reduce the air temperature around them by as much as 10-20 °F, without you getting all wet.

Do misting fans do a good job keeping you cool?

Misting fans are an excellent way of keeping cool outdoors as, unlike a standard fan, they can actually cool the air around them.

This also applies to semi-enclosed spaces where traditional air-conditioning, which requires a closed system to function and is normally very expensive to fit, isn’t an option. Misting fans are also easy to install and use, with most connecting to standard electrical outlets and garden hose attachments.

What are the different types of misting fans?

Misting fans come in various models with different operations, and selecting the right one for you should be based on what you’re planning on using it for.

Portable misting fans, like the Arctic Cove, don’t need an electrical hookup or a hosepipe connection to work. They usually run on a battery and can be mounted above anything that you can store water in.

This makes them ideal for taking with you on your travels as they can provide cooling at places like the beach or when you are out camping.

If you have an outdoor cooking area or patio you want to cool, then a wall-mounted fan allows you to position your misting fan at the optimal angle and have all the cables fixed in place, so they are in the way.

Stand fans are what most of us think of when we imagine an eclectic fan. They come on an adjustable height stand, hence the name, and the misting function can be often be turned on and off, meaning they can be used both indoors and outdoors.

Oscillation is normally a feature that can be applied to all of the fans above. Oscillating just means the fan swings from side to side, increasing the area which it is capable of cooling.

Unlike a standard fan, a misting fan will actually cool the air around you, making it an excellent way to enjoy the sunshine without baking in the heat. This is especially true if you’re planning on firing up the grill, as that fine mist can save you from becoming as seared as the stakes you’re cooking.

If you’ve got some advice on getting the best out of a misting fan, or you own one that you think should have made our list, we’d love to hear about it in the comments section below!

A homemade wood-fired pizza is a thing of beauty, but not all of us have the space to build a full-sizwed authentic Italian pizza oven in our backyard.  The good news is, countertop pizza ovens have come in leaps and bounds over the last few years and today we’ll be comparing two of the best…

How to Build Your Own Pizza Oven

There’s no doubt that the best way to make great pizza is in a proper pizza oven! Unfortunately, that’s not just an opinion. The puffy, bubbly crust and slightly charred leopard-spotted base that are the signs of a well-cooked Neapolitan style pizza result from a very specific cooking environment. Well the cost of a good…

Authentic wood fired pizza is hard to replicate at home without spending a fortune (or teaching yourself masonry). That’s exactly what Ooni has set out to fix.  Ooni offers a range of different sizes and fuel options. I’ve been testing out the top-of-the-line Ooni Pro 16 Multi-Fuel pizza oven over the last few months to…

Once you’ve been bitten by the barbecue bug it’s only a matter of time until you start collecting offset log burner style smokers. While you can easily stash bags of charcoal around the house, it won’t take long before you get in trouble for leaving huge piles of wood around the yard (you may want…

9 DIY Smoker Plans for Building Your Own Smoker: Beginner to Experienced

Building your own smoker is a great project for any pitmasters who enjoy DIY and want the satisfaction of knowing they didn’t just cook the food, they built the smoker it was cooked in! The first thing you need to do before you get to work is to decide what kind of smoker you are…

Pizza peels are an essential part of any pizzaiolo’s tool kit, along with pizza stone and pizza cutter. It allows you to navigate a scorching hot pizza oven and easily reposition your pizza without any risk to life and limb.  To make sure you get the most out of your pizza peel, we’ve run down…