Busting out your grill during the sunny summer months should mean fun, family, and some beautifully cooked food. However, it could also mean a house fire or trip to the emergency room if done wrong.

That statement might sound a little pessimistic, but there are stats to back it up!

According to the National Fire Protection Agency (NFPA) an average of 19,000 patients per year end up in the hospital because of grill-based injuries and gas and charcoal grills combined cause around 4,200 house fires and 5,600 external fires per year.

So, if you don’t plan on having this year’s home videos featured in a “Greatest grill fails compilation” (it turns out these videos are quite popular on YouTube and I dare you not to laugh while watching it) then check out these grilling safety tips.

1. Only use propane and charcoal grills outdoors

This might seem obvious, but given the stats we quoted above, perhaps it’s not quite obvious enough.

Open flame fuels like propane and charcoal are for outdoor use only. While safe to use in the proper environment, they can be prone to flare-ups and spitting which does not combine well with carpets and soft furnishings.

There’s also the fact that burning charcoal in enclosed spaces can lead to death or brain damage.

If it’s raining or cold outside, you’ll just have to bundle up.

2. Give your grill plenty of space

When you are setting up your grill, consider the space around it.

It’s going to radiate heat when it’s cooking and you don’t want anything accidentally coming into contact with it. In a worst-case scenario, having a lit grill to close to a wall, a fence, overhanging tree branches, or under an awning can cause a fire.

Even without actually causing a fire, incorrect placement of your grill can leave unsightly scorch marks, cause damage, or severely wilt your other half’s prized tomato plants!

If the grill is rocking… you’re probably going to get hurt.

It’s not as catchy as that other, similar, saying, but it’s still worth paying attention to. It’s really important that you make sure you are basing your grill on a stable surface. The last thing you want is it tipping over and spilling hot fat, perfectly good food, and superhot chunks of charcoal everywhere.

Best to invest in a grill mat if you don’t have concrete or pavers to put your grill on. 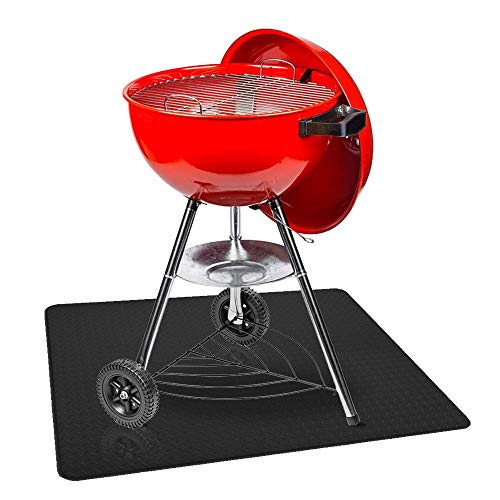 4. Keep children and pets at a safe distance

Toddlers and pets have many of the same issues when it comes to grilling safety. They don’t understand the danger, but they are very enthusiastic.

“Children under five accounted for an average of 38% of the contact-type burns per year. These burns typically occurred when someone, often a child, bumped into, touched or fell on the grill, grill part or hot coals.”

It’s best to set up the grill away from the main socializing area to prevent accidents caused by little people or dogs getting underfoot while you are carrying hot food around.

Grilling means grease and, although it’s no one’s favorite job, cleaning old grease out of your grill keeps you safer. Accumulations of grease can act as additional fuel, cause sudden, dangerous flare-ups and actually account for 20% of all grill fires.

Once the cooking is over, it’s best to make sure you give your grill a good scrub before you pack it away again.

Your friends are here, the music is playing, the drink is flowing but, unfortunately, if you are the one who decided to be a pitmaster, you can’t go join them while the grill is still lit.

You wouldn’t wander off and leave an open fire unattended on your property at any other time and you shouldn’t start doing so just because it’s BBQ day.

7. Start a gas grill with the lid open

Keeping the lid open while you start up your gas grill allows excess unburned gas to escape harmlessly.

Keeping the lid closed can create an anaerobic atmosphere where the gas pools under the grill lid, only to suddenly combust when the lid is opened and oxygen rushes in.

8. Light charcoal in a charcoal chimney

Not only does a charcoal chimney make it quick and easy to start your coals, but it is also a safer way of starting a charcoal grill as it doesn’t involve the use of accelerants like lighter fluid and you are only lighting a smaller, more manageable number of coals.

Remember that the heat and smoke from the chimney will go straight up, so make sure it is clear of any overhangs before you light it, and also remember to put the hot chimney somewhere safe and out of the way after use. 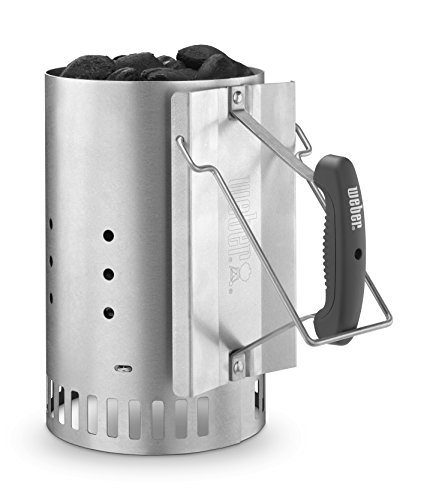 Lighter fluid is dangerous stuff and applying it carelessly, especially to hot coals, can cause it to suddenly flare up into a large fire. That fire can also track back up the stream of the fluid to the bottle you are holding with predictably disastrous effects.

For grilling safety, the best way to use lighter fluid is to pour it over a pyramid of coals before lighting them, or not at all.

10. Shut down your grill properly

Many a fire has started because a grill has been incorrectly shut down. Charcoal can still be incredibly hot, even if it is entirely ashed over. The best way to avoid accidents is to follow the correct shutdown procedure for your grill.

For a gas grill, remember to disconnect the propane tank and move it away from the grill after use, making sure that all the valves are firmly in the “closed” position to avoid gas leakage when you go to start it up again.

For charcoal, wait for at least 48 hours to ensure that the ashes are entirely cooled before you attempt to dispose of them and clean the grill.

12. Watch out for flare-ups

As we said earlier, cooking means grease and grease means the possibility of flare-ups.

If the grease does catch and flare, you need to be on the spot to react quickly by taking the food off the grill with tongs and using the lid to smother the flames by lowering the amount of oxygen the fire has access to.

Grilling food to the proper temperature isn’t as simple as cooking it in an oven. The temperature is less consistent, grills are prone to hot spots, and, if you are prepping food outdoors, there is a greater chance of cross-contamination.

You can avoid any unfortunate food-safety related incidents by learning some basic food safety.

Start by using a meat thermometer to check that your food has reached a safe minimum temperature, avoid cross-contamination by preparing food indoors and in advance, and make sure that all food is kept above 140ºF until it is served.

Grilling isn’t exactly a dangerous activity, but, as with anything that involves an open flame, there is an element of risk. By following our grilling safety tips, you can manage that risk while still having a great time.

We’re spending our Black Friday sifting through thousands of deals across the web to find the best discounts for grilling fanatics and barbecue lovers. There