The Lockhart grabbed our attention with its unique design. Pit Boss has essentially added a double door smoker cabinet on top of a new and improved pellet grill.

This gives you a whopping 2,136 square inches of cooking area, making the Lockhart the largest pellet grill we’ve reviewed.

In this hands-on review, we’ll go through our experience cooking on the Lockhart for the last few months so read on to find out how well this grill performs in the real world.

Pit Boss sent me this grill for free in return for my honest review. All thoughts and opinions are my own

The Pit Boss Platinum Lockhart is essentially a traditional wood-fired pellet grill on the bottom, with a double-door smoke cabinet on the top.

For the most part, the grill operates exactly how you would expect for a pellet grill.

The grill requires an electrical connection to power the auger, heating element, control panel, and lighting.

You set your desired temperature, let it come to temp, and then just cook.

It’s as easy or easier than using a gas grill but with the benefit of wood flavor on all your cooks.

Over the last few months I’ve used the Lockhart for a number of cooks including:

This grill is versatile and easy to use – far easier both for cooking and cleanup than my traditional smoker.

One of the common issues with pellet grills is that they don’t get hot enough to sear.

Pit Boss have got around this with the use of an adjustable slide-plate flame broiler which you can see in action below.

It doesn’t get as hot as my Weber Summit so searing suffers somewhat but even so, The Lockhart has become my go-to grill for most of my cooks.

Pellet consumption is moderate but not excessive.

Thermometers are built into both the grill area and the smoke cabinet and you can add up to 4 meat probes.  There’s plenty of cook area in both modes for all but the largest cuts of meat.

One other potential negative was you can’t control the smoke cabinet independently of the main grill.

To get the temperature you want, you have to fiddle with the grill temperature and look for how the smoke cabinet temperature corresponds.

You’re better of thinking of the smoke cabinet as an extension of the main grill.

If you want a pellet grill with endless space, versatility and searing capability then the Lockhart is definitely worth considering.

Note that the Lockhart is currently available for pre-order at Walmart only. 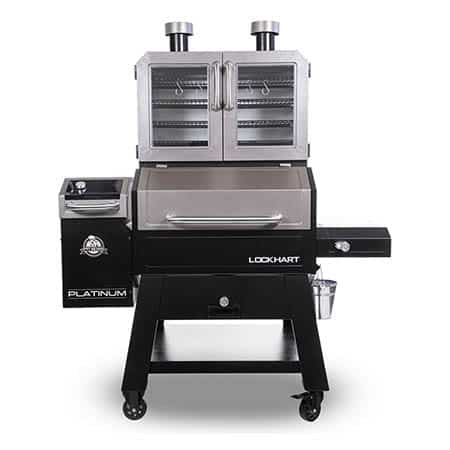 We may earn a commission if you click this link and make a purchase at no extra cost to you.

The Lockhart grill arrived on a big pallet.

Delivery was to my garage door in this case so it’s up to you to move it where you want it (not so easy to do!) I ended up assembling right where I got the pallet and then wheeling the assembled grill to my backyard.

Assembly ended up taking about two and half hours but was straightforward and didn’t require much beyond a screwdriver and a wrench.

The instructions were easy to follow and all the pieces fit well and were well machined. Overall I was quite pleased with the initial assembly and setup of the grill.

Besides the grill itself, the Lockhart includes 2 meat probes as well as 6 sausage hooks.

The overall build quality of the grill is quite good.  It went together well (good machining), and the construction is almost all coated metal of about ⅛” thickness.

There are a few design issues that I wish Pit Boss had given a bit more thought.

The lid to the grill cabinet is kind of annoying. When you lift it up it may not stay up by itself because of the smoke cabinet.

I’ve had it come crashing down on me multiple times so I started always keeping one hand on the handle. I often need two hands when working on the grill.

I spoke to Pit Boss about this, and they told me this shouldn’t happen and I most likely had a minor defect with my door. Hopefully, this is the case, and it won’t be a problem for others.

Thankfully there’s no such issue on the smoke cabinet because those doors open side to side.

The wood pellet hopper also seems to have a bit of a design flaw.  While it is sloped to feed the auger wood pellets won’t slide down it smoothly once you get low.

Worse, there’s a “safety grill” at the top of the hopper making it difficult to push the pellets down.

The result is I often end up “running out” of pellets in the middle of a cook even though there are plenty in the hopper.

The pellet cleanout is a great idea – a port in the back where you can empty pellets.

However, they positioned it too close to the frame so you cannot actually get a bucket close enough to it without holding it.  Since you need to push down pellets to get them all out at the same time, this makes cleanout difficult.

As mentioned previously, you cannot directly set the temperature for the smoke cabinet, only the grilling area.

Running the meat probes is difficult, especially if the grill is hot.  There are eyelets in the smoker cabinet, grill area, and to the control board to run your probe wires.

However, the access to the control board eyelet is very tight, as is the one to the grill area.

Given their location you’re either running the probe with gloves on (difficult) or doing it before you heat the grill.

I found it was best to just run these beforehand though that meant your grill or smoke area was open while you did it. Worse yet, for the grill area, you need to insert your probe with one hand as your other is holding up the grill area lid.

These issues are mostly nitpicks rather than deal breakers and you may find that the above issues don’t bother you but I wanted to be thorough so you don’t get any nasty surprises.

No cover came with the smoker. I would recommend getting the cover for an electrical appliance that is going to be sitting outside.

Cooking on the Lockhart

This worked quite well for grilling and was really easy to use.

As I mentioned above, there there was no way to target the temperature for the smoking cabinet.

Instead, you have to fiddle with the grill temperature and look for how the smoke cabinet temperature corresponded. (Note the lowest temperature I could get the smoker to was 120°F).

I assume the added complexity would have pushed the price up too high.

Overall, there are a lot of features on this grill and I wish the manual did a better job explaining them all.

The manual was excellent for assembly, but the details on operating the grill are very sparse.

There’s a lot of fluff about grilling and smoking in general, but not details on this grill in particular.

I would have liked a paragraph or two on how to use the smoke baffles, tips on the slide for direct/indirect heat, ash removal, or tips on indirect heat on the grill vs. the smoke cabinet.

But all of the above I was able to figure out after a few trial runs.

Controlling the grill with the app

The Pit Boss app is still new as of this writing and I’m hoping much of this can improve. That said, I found the app pretty disappointing.

The app connects by Bluetooth to your grill and gives you a view almost identical to what you see on the grill display itself.

I tested the app on iPhone, iPad, and Android.

A number of usability elements could be improved.  In particular, the active temperatures are rendered in a dark grey that is very difficult to distinguish from the black background.

The app depends on Bluetooth so the range is limited. We have noticed a number of “smart” grill toys using WiFi instead to get around the poor range of Bluetooth.

If you go to a different app on your phone, when you come back you have to connect again.  It’s annoying if you just want to check your temperature form time to time while using your phone for other things.

There also isn’t a history function for grill or meat temperature during the cook.

I’m hoping with time there is a bit more investment from Pit Boss in the app both in user experience and functionality and this is all simply a matter of it being a very new product.

All of the above can easily be improved with future app versions, and you can still get great results on this grill without ever using the App.

Should you buy the Pit Boss Lockhart?

Overall I love cooking with the Pit Boss Platinum Lockhart.

Its not an inexpensive grill but for the price provides a ton of function and I think is a fair value.

The Lockhart provides an excellent way to cook over wood and get that wood flavor, while not requiring the setup and cleanup time of a traditional smoker or charcoal grill.

I’d recommend this for anyone just getting into bbq who wants a single grill/smoker combination, or for a more seasoned chef who wants something simple for those week-day dinners.

The Lockhart is currently available for pre-order at Walmart only.

We may earn a commission if you click this link and make a purchase at no extra cost to you. 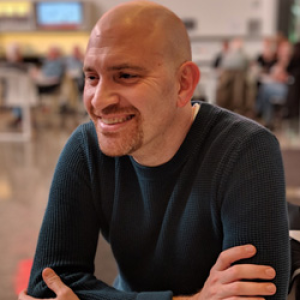 As a tech exec working in the heart of Silicon Valley, I’ve found the low-and-slow of BBQ to be the perfect antidote to the daily grind and pace of my work life. There’s no better antidote to stress than a weekend spent smoking a brisket or a few racks of ribs.  Then, of course, the best part is getting to share the result with family and friends. I love understanding the “science” behind the cook and, being a techie, I enjoy figuring out if new gadgets can give me a better cook. But most of all, I just love eating bbq! 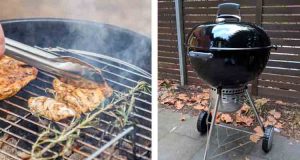 Lid up VS Lid Down When Grilling

Have you never known exactly what to do with your grill lid? For most people grill up or grill down isn’t something they even think 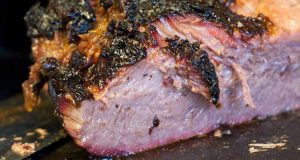 How to get a good bark when smoking meat

There’s no denying that eating barbecue is a sensory experience. The smell as it comes off the pit, and the sight of the smoke ring