Jump to Recipe Jump to Video

I’m a huge wing eater, and seriously love cooking them. I have a few recipes that have won awards at BBQ competitions.

Yet in saying all that, I always come back to the Buffalo wings, why?

I think because when you add the blue cheese sauce, you have the perfect package, crispy chicken, tangy and spicy sauce with a nice buttery texture, and the soothing cheese sauce that just explodes in your mouth.

In this recipe I’ll show you a trick to guarantee ultra crispy skin on your chicken wings, no deep fryer required.

Why do we call these Buffalo wings?

There are a couple of stories floating about on how and where these tasty treat were first thought of and made.

One such story is that they were first made in the Anchor Bar in Buffalo by Teressa Bellissimo, who owned a bar alongside her husband Frank, New York in 1964.

There was an impromptu visit from the bar owner’s son and some of his friends late one Friday night. His mother wanted to make a quick meal and had nothing but wings that were usually used for stock. She decided to fry them up and the rest is history, or is it?

It is also noted that John Young stated that the Anchor Bar did not have the Buffalo Wings as a regular menu item until 1974.

No matter who made them first, I love them and thank them for thinking outside of the box because at the time these were invented, no one ate wings.

If you’ve smoked chicken wings before and found the skin had a rubbery texture, the problem is you didn’t ramp the heat up enough.

I love using a BBQ with a Vortex as it channels the heat up to the dome of the lid and pushes it back down the sides and anything on the outermost part of the grilling grate is effectively going to be air fried. 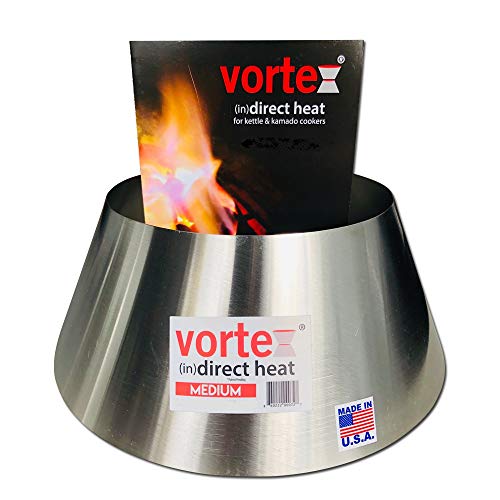 I have made many crispy wings using this method, but find it especially good for Buffalo wings that need that deep-fried texture to be considered authentic.

By cooking the wings at a high heat of 450°F and above, it renders out a lot of the chicken fat and crisps up the skin. Thus giving a fried texture.

I have had many people state they thought they were eating fried chicken wings after serving them up some of these. Once coated in the sauce, you cannot pick the difference. So we have just made “fried” chicken wings healthy.

Now you don’t need a to produce these results, as long as you have a hooded BBQ that can reach these high temps indirectly. If you try and cook chicken with such high heat directly, you’ll burn the outside and the inside will still be raw and there is no such thing as medium rare chicken.

Items that will help you cook these are:

Building our base wing seasoning

Yes, it can and this recipe all comes down to one special ingredient. Aluminium free baking powder.

Yeah, it sounds tasty, doesn’t it? Well as long as you use aluminum-free baking powder, you will not taste it. But you need to make sure it is baking powder and not baking soda as the two items are completely different.

Now baking powder is not the only seasoning, there is also garlic powder, salt and pepper. We do need some flavor on these wings before they get their hot sauce bath.

Everyone seems to have a hot sauce recipe.

The fact that Franks Hot Sauce is sold EVERYWHERE, lays some claim that they just may know what they are doing.

It is sold at any supermarket I walk into. Now, these supermarkets also sell other hot sauces but Franks is the only one that is sold in every store.

The only thing you need to add to Franks to make it an authentic Buffalo wing sauce is, butter. Yep, good old flavor packed butter to cut through a bit of the tang and give the sauce a nice silky texture.

I know some people like to add extra cayenne pepper to the mix, I tend to like my stomach lining the way it is and feel this combo produces enough heat for my taste buds.

I do find I have to play with the ratios for my children, I just swing the levels towards the butter side for them and they are happy and so are their stomachs.

Setting up the BBQ for hot and fast indirect cooking

I’ll start off by lighting ¾ of a chimney starter of briquettes and once this is fully alight, I’ll dump the hot coals into the Kettle Kone and put the grill in place and the lid back on, making sure all of the vents are wide open.

The Kettle Kone (Vortex) is made to ramp up the heat, forcing the heat towards the top of the lid and then is rolls down the sides of the lid and bowl making the outermost part of the cooking grate extremely hot. Yet we don’t get any direct radiant heat from the flames, so the chances of burnt meat disappear and we end up with perfectly cooked meat every time.

I’ll allow the grill to warm up for 5 to 10 minutes before adding the wings. The reason for this is a hot grill will sear our food, thus preventing it from sticking to the grill. It will also start the caramelising of the underside of our meat.

So the grill has warmed up, time to add the wings on the outermost part of the cooking grate and place the lid back on.

These will take 45 minutes to cook, so I’ll set a time for every 15 minutes and I’ll turn the lid a third of the way every 15 minutes. The reason is, the lid vent creates a hotspot and by turning the lid we are ensuring all the food gets cooked evenly.

Try not to lift the lid while turning, we want to keep the high heat in there.

Once the 45 minutes is up, it’s time to take the wings off the heat and into a bowl for a hot sauce bath.

I’ll normally have two batches ready to go, so take the first batch off and throw the second batch on, trust me, you’ll need to as well. These go so fast at any BBQ I serve them up at.

Outside of Buffalo, New York, a lot of people prefer or like to use ranch dressing with their Buffalo wings.

I don’t and it’s for one reason and one reason only, I love cheese. I do not care that it was the authentic way they were served. I’m a cheese nut and if given the choice between no cheese and some cheese, I’m going down the cheese highway every single time.

I do also feel it adds a lot to the experience of eating buffalo wings, the blue cheese sauce texture and taste blends so well with the silky tangy hot sauce.

When you find a pairing that works so well together, why separate them?

I may be a little biased here, as I stated, I do love cheese.

Serve with the traditional sliced carrots and celery, on their own or on a BBQ platter with ribs, brisket, pulled pork.

10 Tips for Smoking a Whole Turkey

As proud proud pitmasters, we can’t sit idly by while the turkey gets dried out and ruined in the oven. Not when we have a perfectly good smoker sitting right outside. Turkey belongs on a smoker, especially around Thanksgiving when oven space is at a premium. You don’t have to worry about ruining Thanksgiving though. By…

A classic dip that takes no time to throw together and pairs well with all manner of scooping vessels.

Easy Chicken Wing Brine (Plus The Best Way To Cook Them)

There’s so much to love about our finger-licking smoked chicken wings with garlic and parmesan sauce.

These chicken kabobs are a great reason to fire up the grill, charred and caramelized morsels of meat and veg, summer on a stick.