If you like to cook in volume or have multiple meats smoking at one time on the same smoker, the ThermoPro TP27 may be for you.

This long-range, wireless meat thermometer has four probes that allow you to accurately cook multiple proteins at once.

In this review, I’ll be sharing my experience testing out the ThermoPro TP27 to see if it’s worth your money.

ThermoPro sent me a free product to test in return for my honest review. All thoughts and opinions are my own.

The ThermoPro TP27 packaging gives a pretty good first impression of the features to come. The layout of parts within the box is thoughtfully designed and an efficient use of space.

The wireless range of the ThermoPro TP27 is especially desirable over the course of longer cooking times. You can manage your meat temperatures from the comfort of your home while the grill does the heavy lifting in your backyard.

The receiver is good for distances up to 500ft, so you can do other errands around the house while keeping an eye on temperatures.

The standalone transmitter also has a screen and programmable buttons, good for quick cooking meats like fish or steaks where you won’t want to venture off.

The four color-coded probes are a boon to anyone who cooks in bulk, especially different meat types.

The ThermoPro TP27 is ready to use out of the box too. Just put in the batteries and plug it in for temperature reads.

It’s also worth noting that the TP27 doesn’t have any WiFi capability so if checking temperatures on your phone is important you are better off looking at the InkBird IBT-4XS or Weber iGrill 2. 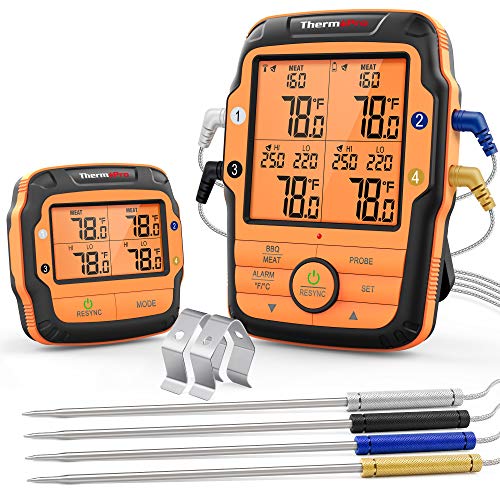 What’s in the box and specifications

The ThermoPro TP27 came well packaged in a notebook-sized box with a battery and user manual. Just install the batteries, and you’re ready to go.

The ThermoPro TP27 is quick to use out of the box. Install the batteries, plug in a probe and you’re good to go from a temperature reading standpoint.

I found it very easy to use and customizable to my needs. I didn’t even need to set a target temperature, as it just reads the probe temperature.

Being able to turn off the beep and go with a vibrate or backlight alarm option was very much appreciated. No one is fond of the continuous beeping when you hit your target temperature. The vibe and light function is a great response to customer feedback from the ThermoPro TP20.

I used this for Thanksgiving turkey with one probe staying in the deepest part of the breast. I tested another probe in the thigh once out of the oven, but it would have been just as good to leave both in for the entirety of the cooking session.

The ThermoPro TP27 is a great remote thermometer as well as a kitchen companion.

It’s not just for backyard BBQ enthusiasts, but for anyone needing multiple temperature reads at once or who does a lot of bulk cooking.

ThermoPro products are typically priced for budget-conscious shoppers. This thermometer is on the expensive side for ThermoPro but compared to high-end four-probe thermometers like the Smoke X4 from ThermoWorks the price point isn’t too bad.

Consumer-friendly features and ease of use make this well worth the money.

Update: ThermoWorks has now discontinued the Thermapen Mk4 and replaced it with the new Thermapen One. Check out our full Thermapen One review here. You can still read our original review of the Mk4 below. I’m going to ruin any suspense and get this out of the way. The Thermapen Mk4 is the best instant-read…

The 6 Best Infrared Thermometers For Cooking in 2022

A good infrared thermometer will let you stand at a safe distance from the heat and still give you a quick and accurate read on the temperature of whatever you point it at, making it a massively useful addition to your arsenal. To make sure you’re working with the best possible kit, we’ve put together an…

The Maverick ET-733 recently made our list of best smoker thermometers. Consistently one of the top selling thermometers on Amazon, it’s easy to see why thermometers form Maverick are one of the most recommended thermometers by professional and amateur pit masters alike. Despite being so popular, the wireless ET-733 is not without its detractors though. You…

I think you’ll agree with me when I say: Trying to cook BBQ without an accurate smoker thermometer setup is like driving a truck on ice at night. With your eyes closed. It’s REALLY hard to produce perfect low and slow BBQ when you can’t keep the temperature of your smoker consistent. And if you…

When it comes to Bluetooth thermometers, we’ve always been a little bit skeptical. Sure, being able to keep track of your meat and pit temperatures on your phone sounds great. But issues with connectivity and limited range have made us stick to tried and true WiFi thermometers like the Thermoworks Smoke. So when a rep…