Billows™ by ThermoWorks is a temperature control fan that works with their Signals thermometer.

It’s basically a fan that you connect to your charcoal or wood fired smoker to control the airflow and hold a steady temperature over a long cook without having to tend to your smoker.

At $59 Billows™ is a great option if you already own the Signals thermometer, as a separate bbq temperature controller can cost up to $350.

For this review, we put the Billows to the test to see how well it controlled the temperature on our Weber Smokey Mountain over a 10+ hour brisket cook.

ThermoWorks sent me a free Billows in return for my honest review. All thoughts and opinions are my own.

The first important thing to note is that Billows will only work with the Signals thermometer.

It will not work with the popular Smoke thermometer or any other third party devices.

While this is a shame for people who have already bought a Smoke, it’s understandable considering the price of similar products from other companies.

We have a detailed Signals review you can check out if you want more details about just the thermometer.

With that out of the way, let’s focus on the Billows.

The main fan attachment unit feels nice and rugged, as we would expect from any ThermoWorks product. It’s made out of plastic but feels heavy duty and stays cool to the touch during a cook.

The connection process is straight-forward. You just need to seal up all but one intake vent on your smoker using the included thermal tape, and then us the clever spring system to connect the Billows to your smoker.

From our research, the Billows connects to the majority of popular smokers including:

The billows uses the ambient temperature probe that cames with your Signals, then you can use up to 3 other channels for measuring food.

If you already own a Signals or plan on getting one, then the Billows is a no brainer.

I didn’t realize how convenient using a temperature controller would be. Once everything was set up I found myself forgetting I had the smoker going at all.

The total cost of Signals + Billows comes to $288 which makes it cheaper than the FireBoard + Controller and the popular Flame Boss 500.

We’ll have a more detailed comparison with other popular controllers at the end of this review.

What comes in the box

Besides the main fan unit, you also get a few cables for connecting the Billows to your Signals, and some heat resistant tape to seal up any open areas around the fan.

The USB-C cable connects to the underside of the fan and then plugs into the adapter.

If you have a Kamado style grill you will need to purchase an additional mounting plate for $5.99.

To test out the billows I decided to cook a small brisket on my 18″ Weber Smokey Mountain.

This smoker has fairly good temperature stability already, but I do usually need to make an adjustment every few hours to maintain a nice even temperature.

The cook was on a cool day, with no wind. I plan to do a followup test to see how well the Billows performs in more extreme conditions.

The installation will vary a little depending on your smoker setup, but I will run through how I did it so you can see how it works.

I followed the manufacturers instructions and used the tape provided to close up the air intake holes I wouldn’t be using (there are 2 other intake dampers I also shut).

To start you leave the exhaust damper slightly open, and I never needed to adjust it.

Attaching the billows is as easy as pinching some clips together and pushing them through the vent hole.

Make sure you have the fan and USB-C connector pointing down. You may also want to plug in the USB-C cord first, otherwise, it can be a bit fiddly to plug it in.

This holds the fan securely in place. There is some high-temperature foam on the edge of the fan to help you get a tight seal.

Make sure you remove the yellow plug before using it!

One thing to note, you will probably need to update the firmware on your Signals to the latest version.

I forgot about this step, and it took me a while to work out why the Billows wasn’t working.

Luckily this process is straight forward and well explained on the ThermoWorks website.

Once the firmware is updated, getting Billows working is simple:

You’ll need to position your Signals fairly close, as both the USB-C cable and your temperature probes need to reach. You may need an extension cable to power the Signals, as the fan can’t run without being plugged in.

The full setup should look something like this (I would recommend placing the Signals on a table, this setup was just to get a photo)

The final step is to plug the ambient pit probe that came with your Signals into port number 4.

Make sure you plug it into the bottom port, as this is the one used to control Billows.

All you need to do now is turn your Signals on and the fan will automatically start blowing.

I used the minion method setup which is also the recommended method in the manufacturer instructions.

I filled the charcoal chamber with Kingsford charcoal briquettes, leaving a small well in the middle and then poured half a charcoal chimney over lit briquettes over the top.

I turned on my Signals, and set the pit temperature to 250°F. Controlling the Billows is done using the set alarm feature.

Once you set your target, the alarm will sound if the temperature goes 25°F above or below the target.

The alarm went off every time I opened the lid but was easily silenced by pressing the ‘VOL” button.

You can see in the picture below the fan icon in the bottom right, indicating the Billows is connected.

The billows fan started going and the internal temperature climbed rapidly to 250°F.

This was an unexpected benefit, as normally it takes a while for my Weber to get up to temperature.

The fan isn’t variable speed. It turns off and on automatically to maintain your set temperature.

This is what my pit temperature graph looked like after 6 hours.

The two big dips were caused by me opening the lid.

ThermoWorks have said they are working on improving the software so that it doesn’t record these big spikes and dips as the actual effect on your smoker is minor.

As you can see the temperature stayed nice and stable, almost always within +/- 10°F of my target temperature.

You can change the target temperature and the Billows will quickly respond.

My brisket wasn’t done until after 10PM, and the Billows did a good job keeping the temperature up as the charcoal supply started to run out.

Normally I would have had to keep opening the vents to supply more oxygen.

How the Billows compares to the competition

If you want to get a fan controller and already own a Signals, I wouldn’t even bother researching the competition. It’s a steal at $59.

However, if you’re in the market for a thermometer + controller, you do have a few options to consider.

Two of the most popular alternative choices are the FireBoard and the Flame Boss 500.

We also have a detailed break down of some of the best temperature controllers if you want to see all the options.

The most obvious competitor to ThermoWorks is the FireBoard FBX11.

Just like Signals, the FireBoard is sold as a stand-alone thermometer with an add-on blower available.

At a quick glance, the FireBoard looks like better value, but you need to purchase the drive fan control cable separately (although you can use a third-party fan)

This brings the total cost of the FireBoard with fan control to $327.95, nearly $40.00 more than the ThermoWorks option.

The FireBoard blower is rated 20 CFM compared to 46 on the Billows.

The FireBoard does have a few advantages though.

The main unit supports up to 6 channels, two more than the Signals. This is useful if you need to monitor a lot of items at once but more than I ever use.

The app experience is a little bit better, and you can set email or SMS alerts when your alarms are triggered.

You can also set rules for your alarms, for example, you can set it so it only triggers after a certain amount of time. This is a great feature to avoid triggering your alarm every time you open your smoker lid.

The primary screen on the Signals is better, showing all the information on one large LCD display whereas the FireBoard rotates through the information.

Should you buy the Billows?

Based on my testing, I would recommend the Billows to anyone looking to add automatic temperature control to their charcoal or wood smoker.

While you are locked into using the Signals thermometer, this isn’t necessarily a bad thing as it’s one of the best options available.

You can purchase Billows and Signals from the ThermoWorks website. 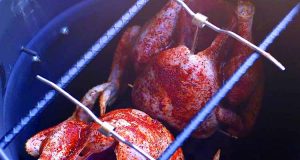 After years of dominating the charcoal smoker market, the Weber Smokey mountain finally has a challenger with the Pit Barrel Cooker. This 18.5″ steel cooker 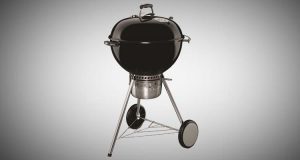 When you picture a backyard barbecue with food sizzling on a charcoal grill, the grill you are most likely picturing is a Weber Kettle. Weber