I firmly believe that cheese and bacon make everything better and this recipe is no exception. It’s low-carb, keto-friendly, and takes less than an hour to cook.

So what is a bratwurst?

Originating in Germany, bratwurst is a type of fresh sausage:

In the United States, bratwurst (commonly nicknamed “brats”) is especially popular in the Midwest. They can be served on a bun like a hot dog, sliced and incorporated into another dish, or just by themselves.

You want to take your knife and slice the bratwurst lengthwise to create a little cradle for your cheese. DON’T slice through to the other side – you want to aim to cut about ¾ of the way through the sausage.

Once you’ve sliced the brat, push the meat filling to the side to create space for the cheese.

You can use almost any type of cheese for this recipe. I’m a fan of sharp cheddar. I also prefer to cut from a larger block of cheese because I find it melts better.

Take your block of cheese and cut it into five small rectangles. You want it to be about a half-inch shorter than the bratwurst on both ends.

Lay the cheese into the center of the sausage, then roll the sausage around it and seal the edge by pushing it together with your fingers. Sealing the edge is essential, so your cheese doesn’t leak out while cooking.

4. Wrap the brats with bacon

Once the bratwurst is stuffed with cheese, wrap the entire thing in a slice of thick-cut streaky bacon.

You can use two slices of bacon if you prefer, but I like to stick to one, so I don’t end up with undercooked bacon on the inside of the wrap.

The finishing touch is a sprinkle of your favorite barbecue rub.

For this recipe, I used the PS Seasoning Notorious P.I.G. rub. It’s a blend of sugar, salt, chili pepper, and garlic – slightly sweet with a little kick of spice at the end.

If you prefer to whip up your own rub at home, check out these Delicious Dry Rubs for Pork.

6. Fire up the smoker

Now just fire up your smoker to 250°F. I smoked these on my Camp Chef Woodwind 24 pellet smoker with Bear Mountain Bourbon BBQ pellets. 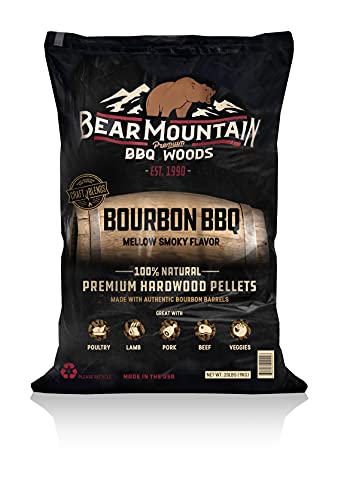 When your smoker is preheated, just place the brats directly on the grates.

Let them smoke for about one hour, or until the internal temperature of the sausage is up to 165°F with an instant-read meat thermometer like the ThermoPro TP19.

Once the sausage hits at least 165°F internal and the bacon is crisped to your liking, they are ready to enjoy!

These brats are delicious on their own, but you can also make a Bacon-wrapped Cheddar “Brat-dog”! Place the bacon-wrapped brat onto a hot dog bun and top with spicy brown mustard for an epic handheld dish.

Here are some great sides that pair perfectly with these brats:

Did you make this recipe?Tag @smokedbbqsource on Instagram so we can admire your work!

There’s so much to love about our finger-licking smoked chicken wings with garlic and parmesan sauce.

Potato salad is that classic side, you find it at pretty much every summer BBQ. I have to say though, it’s often a sloppy creamy mess with mystery bits that really do not appeal to me at all. Over the years I’ve developed this alternative, which in my humble opinion is a fresher and more…

Everything You Need to Know About Boston Butts

What is Boston Butt? If you are planning to make pulled pork, you’ll most likely be on the hunt for a cut of meat known as the “Boston butt”. This is what most recipes will recommend you use. However, there is confusion about what exactly a Boston butt is. Depending on where you live, it…

How to Store & Reheat Pulled Pork

Cooking “too much” pulled pork is easy, especially given that “too much pulled pork” isn’t even really a thing. Reheating pulled pork the next day, however, is a little harder and can often result in a disappointing dried out mess if not done correctly. In this article, we’ll be looking at how you can store…