The REC TEC RT-700 adds WiFi connectivity and a host of over improvements over its predecessor the popular RT-680.

The RT-700 aka “The Bull” is REC TECs flagship pellet grill and has been designed to compete with the best offerings from brands like Traeger and Yoder.

This is my favorite pellet grill based on looks alone, but the big question is how well does it perform?

In this review, we’ll run through all the pros and cons to help you make up your own mind.

You get 702 square inches of cooking space on 1/4″ 304 stainless steel grill grates with an optional second shelf that can bring your total cooking area to 1054 square inches.

The 40lb hopper gives you up to 40 hours of continuous cooking.

Even without the second shelf, you can easily fit 6 large racks of ribs.

You get two meat probes that plug directly into the grills controller. If you prefer to use an aftermarket thermometer, there is a convenient probe port hole so you don’t need to close the lid over your probe wires.

The grill is built like a tank with heavy-duty stainless steel. Everything seals well and you shouldn’t have any problem holding stale temperatures.

You also get a 6-year warranty which is among the best in the industry just in case you had any concerns. 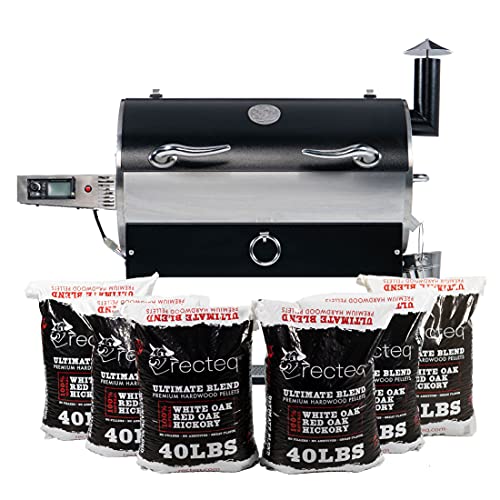 You might also want to check the REC TEC website as they offer several package bundles you can choose from. If you decide to buy from Amazon that package currently includes the 200lbs of pellets, two not-stick grill mats and the premium custom fit grill cover.

Is REC TEC a good company to buy from?

The RT-700 is an investment, so it’s worth knowing a little bit about the manufacturer.

REC TEC was started out of a garage by two friends in Augusta Georgia back in 2009.

They don’t use dealers, instead preferring to sell directly from their website and via Amazon.

The REC TEC grill lineup is nice and simple. You’ve got the RT-700 which is the largest, and then the RT-590 is the mid-size option and the RT-340 is for smaller families or for tailgating.

The construction and tech in each grill is very similar.

From what we hear customer service is excellent. You can always get a real human on the phone if you have any issues with your grill.

The company is effective on social media and easy to engage with. They also run a 1 week BBQ academy in Georgia so they are active in the BBQ community.

One last thing to note, with REC TEC the price you see is the price. They don’t run deals of any kind.

I actually kind of like this mentality, as you don’t have to sit around waiting and hoping for the product to go on special.

Assembly is fairly straight forward and should take one person 30 minutes to an hour to assemble.

You get a printed manual you can follow, but the easiest option is to refer to the manufacturer’s YouTube videos.

REC TEC claim that if you can operate a microwave then you can be a pitmaster using this grill.

And they’re not wrong. That’s the beauty of pellet grill tech.

All you need to do is add wood pellets, turn on the unit, set your temperature and walk away.

The app performance has been a little less solid. The app currently has a 2.9/5 rating on Android and a 3.7/5 on Apple. During a long cook, it can become sluggish and stop displaying changes.

We always recommend buying the best grill, as the app can be easily upgraded and it looks like REC TEC has already made some improvements in the last few months.

The RT-700 is easily one of the best grills in its price range. It’s better built than Traeger and will hold temp better.

This might not matter to you, but I think this is the best looking pellet grill out there.

The one area that lets it down is the companion App. The offering from Traeger is definitely better in this regard.

The other option you might be considering is the Yoder YS640s which is a similar size, price and quality level but doesn’t include WiFi control.

The Yoder offers 1 year a more variable warranty. You get 1 year on the igniter, 3 years on the electronics and 10 years on the body.

Otherwise, there really isn’t a lot between these two grills so it comes down to if you want to use the WiFi feature.

If this is a concern you can always opt for a third party thermometer like the FireBoard, however, this won’t connect to your grill.

There are plenty of drum and barrel smoker models on the market, but they are not all made with competitive barbecue in mind. For this review, I’ve been testing out the Pro version of the classic Oklahoma Joe’s Bronco Drum Smoker. If you frequent the competition barbecue circuits, you will notice more and more teams…

I would never recommend buying a grill just because it turns heads. There are plenty of leaky, budget smokers that look cool but couldn’t maintain a steady temperature if your life depended on it. That’s where the Grilla comes in. With it’s unique design and clever technology the Grilla wood pellet grill is fast becoming…

The Best Charcoal Smokers for 2022

People love to brag about cooking with charcoal. You’ve got to admit, there’s a certain amount of romance with firing up the charcoal smoker. Maybe it’s the more interactive nature and the fact it requires a little bit of skill to work with. While we all love to tell stories about “slaving over the coals…

Camp Chef VS Traeger: The Head to Head

Traeger might have built its reputation on being the first company to mass-market the pellet grill, but, while they still have excellent brand recognition, their reputation for quality has taken a hit in recent years. With Camp Chef growing a strong fan base for producing no-nonsense grills that nail the basics, we’ve decided it’s high…

After years of dominating the charcoal smoker market, the Weber Smokey mountain finally has a challenger with the Pit Barrel Cooker. This 18.5″ steel cooker is a variation on the classic Ugly Drum Smoker design. This style of smoker was more common for DIY enthusiasts until Noah Glanville (Iraq war veteran and founder of the…

Masterbuilt smokers seem to dominate a lot of the discussion when it comes to Electric Smokers. And while they are definitely worth considering, Char-Broil quietly produce well sized, affordable electric smokers that could easily give them a run for their money. In this review we take a look at the 725 Square Inch Deluxe Electric Smoker….