The Science of Smoke

Have you ever wondered what smoke actually is, and how it makes our food taste so good?

Considering smoke is an essential ingredient you use every time you barbecue, it’s well worth learning a little more about the science behind it, and how it flavors food.

Don’t worry, you won’t need a chemistry degree to get anything out of this guide.

Smoke is a combination of tiny, unburnt particles that are released when we burn something, in this case, wood.

The volatile organic compounds in wood break down and turn into smoke when burned – creating that unmistakable flavor that cannot be replicated in an oven.

The most important components of wood smoke are an oil known as syringol and a substance known as guaiacol. Both syringol and guaiacol are produced when a plant polymer present in wood, called lignin, is burned.

These substances are predominantly responsible for that smoky taste you enjoy.

We all know that meat “takes on smoke” during barbecue, but how does the smoke actually flavor the meat?

As meat sponges up smoke, a whole host of fascinating chemical processes are actually going on.

“Meat contains tools for memorializing the character of that smoke in a detailed flavor snapshot. Water, fat and proteins embedded in a piece of barbecue each capture a different angle of the smoke’s portrait.”

The Science of Barbecue

Nitric oxide and other chemicals in the smoke react with the iron in the meat, causing the pink smoke ring.

Very little of the smoke you generate actually comes into direct contact with your meat. This is due to the tiny amount of stationary air that surrounds objects.

To reduce this boundary effect, and get more smoky flavor imparted to your food, wetting your meat or using a rub can make a huge difference.

Particles move from warm to cool surfaces in a process known as thermophoresis.

As your uncooked meat is cooler than the air rising from your fire, the smoke will be attracted to your food. Wet surfaces also tend to trap the smoke.

As smoke cannot penetrate into your cut of meat, most of the smoky flavor will be on the surface. A small amount will make it through to the first quarter of an inch or so, resulting in that coveted pink smoke ring.

It’s a common belief in the barbecue community that meat stops taking on smoke.

There is some trueth to this. As we talked about already, smoke tends to stick better to cold and wet surfaces so it’s only natural that as your meat cooks, less smoke will stick.

But there’s no magical process that stops meat from taking on smoke.

Meats that are smoked for longer tend to have smokier flavors, it is a myth that meat stops taking on smoke after two hours!

Provided you keep adding more wood, your meat will continue to take on more and more smoke and flavor. You can also lightly spritz or baste your meat throughout the cooking process to get even more smoke absorption.

Too much of a good thing?

Believe it or not, it’s possible to have too much smoke.

More smoke is not always better. Too much smoke will make your meat taste bitter, a far cry from that delicious hint of complex smokiness you were aiming for.

If you’re new to smoking, try starting out with just two to three ounces of wood. You can increase quantities for extra thick cuts; however, as a rule of thumb, less is generally better.

Air flow, humidity, and personal preferences can all vary considerably, so start out with less smoke and you can always add more later on as you become accustomed to the technique.

Over time you’ll develop a feeling for how much smoke you need for optimum results.

How to generate smoke

We generate smoke through a process known as combustion which involves the thermal conversion of fuel with oxygen, creating carbon dioxide and water vapor.

Or in simple terms, you make smoke by burning something!

If you have complete combustion, everything burns, resulting in just CO2 and steam production.

However, when you burn wood on a smoker, not everything burns completely –  a process known as incomplete combustion.

Wood is made up of volatile organic compounds, which become gases when heated, as well as carbon, minerals, and water.

However, it is the evaporation of these volatile organic compounds which create the flavorful smoke that makes your smoked brisket so delicious.

You can generate smoke for your grill in various ways:

The best woods for barbecue

You could have a whole book dedicated to this topic. The short version is that hardwoods are the best woods to use for smoking, with fruitwoods being particularly good.

Here are some of the most popular woods used for generating smoke – try out several and find your favorite! 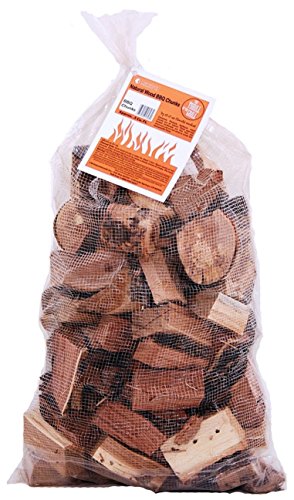 When wood heats up enough to burn, the bonds between its elements (carbon, hydrogen and oxygen, plus other trace elements) begin to break down. Breaking down these bonds releases energy and atoms in a process called pyrolysis.

The unbound atoms form a hot gas and quickly combine with oxygen present in the air to produce carbon dioxide. As wood is made up of a considerable amount of water, this is released as it heats, and the hydrogen atoms combine with the oxygen to produce water vapor or steam.

So, when you stick another log on the fire, it dries out first, producing large amounts of steam. Then, once dry, it begins to break down, producing smoke.

This release of energy keeps the oxidation process going in a sustained chain reaction and your fire continues burning.

Most of us learn the hard way that not all smoke tastes good.

Before you add your meat, you’ll make sure your smoker is putting out the right type of smoke

Typically described as thin, blue smoke, good smoke will give your meat its delicious flavor.

Bad smoke, on the other hand, creates a bitter flavor with an oily aftertaste. To avoid cooking your meat with bad smoke, and potentially ruining your meal, here’s the lowdown why you get these two “types” of smoke and how to avoid bad smoke.

How to get good smoke

The wood that you use for smoking is composed of numerous compounds that are released when it burns.

Hemicellulose, lignin, and cellulose present in wood break down at low temperatures to create those complex smoky aromas we look for when BBQing.

However, burn them at too high temperatures and they break down even further, producing unpleasant tasting compounds.

When you start up your grill, you most probably open all the vents to maximize airflow, helping to get your fire going. This can cause the fire to spread too fast to unburned wood, giving off large particles, which are responsible for bad smoke.

As your grill heats up, and you’re ready to start cooking, you should start to close off some of your air vents.

This, in turn, reduces the amount of oxygen to your fire, so that it burns slower and produces those desirable, good smoke molecules.

To avoid disappointing results, you should take time to assess the smoke coming off your grill before adding your meat. Make sure you have that thin, blue smoke, not clouds of thick, white smoke before cooking.

Highly coveted, a smoke ring gives your meat a mouth-watering appearance and will also make you look like a grilling pro. But exactly what is a smoke ring?

Put simply, it is the pink layer that is found directly below your smoked meat’s surface.

When carbon and nitrogen combine with oxygen to become carbon monoxide and nitrogen oxide, they interact with the meat’s myoglobin, fixing it permanently pink.

The rest of the meat further into the cut is not as accessible to these gases and cooks with the heat, thus becoming gray.

How to get a good smoke ring

Struggling to get a good smoke ring? Follow these simple steps.

Want to learn more about smoke rings? Check out our guide to The Secret to Getting a Good Smoke Ring.

You can smoke more than just meat

If you just can’t get enough of that intense smokey flavor, why not try smoking other foods? You can smoke your own desserts, cheese, nuts and even cocktails!

Here are some of our favorite ideas.

Smoke is essential to achieving that delicious flavor that makes grilled foods so irresistible. As we’ve seen, it’s important to understand the science of smoke to ensure that you get the very best results from your BBQ.

We hope that this guide has been informative and will help you to better understand the essentials of smoking, as well as providing you with plenty of helpful tips for smokier-tasting food and how to get that elusive smoke ring.

If you enjoyed this article, don’t forget to let us know your thoughts in the comments section and remember to share with your grilling pals!

Ground Beef Vs. Ground Chuck: What Are The Differences?

Not sure why you’d pick ground chuck over regular ground beef? Read on, and we’ll break down the differences and why you might choose one

Don’t have the time to make your own pizza sauce? Convenient, tasty, and a definite cupboard essential, store-bought pizza sauces are a great alternative.  Check