Have you ever wondered why some peppers are hotter than others?

It can be difficult to gauge which varieties of pepper are ‘hot’ and which are ‘mild’ if we don’t first determine what these criteria are.

This is where the Scoville Scale can be helpful.

In this guide, you will learn all you need to know about peppers, their heat level and how to understand the Scoville scale so you can pick the right pepper for any cooking situation.

What exactly is the Scoville Scale?

The Scoville Heat Scale is named after scientist Wilbur Scoville. While working for a pharmaceutical company in 1912, Scoville created a test used to measure a chili pepper’s pungency and level of heat, originally called the Scoville Organoleptic Test.

For this testing method, he mixed ground-up peppers with sugar-water into a solution he then gave to a panel of taste testers.

The solution was then diluted with more sugar-water until the mixture was no longer spicy to the tasting panel.

peppers were assigned a heat level based on the number of dilutions needed to absolve the spiciness. These values are called Scoville Heat Units – or SHUs.

SHUs don’t just measure the spiciness of peppers though. They also apply to anything that is derived from peppers too, such as hot sauces or powders.

The Scoville Scale rating measures the concentration of capsaicin that produces the heat sensation on our tongues.

Capsaicin and other capsaicinoid chemicals occur naturally in all peppers, creating unique tastes and heat levels amongst varieties.

How do some of the most common peppers measure on the Scoville Scale?

Spicy peppers are remarkably complex and come in multiple flavor and heat variations.

Let’s take a look at some of the most common chili peppers and see how they measure up on the Scoville Scale.

The table below shows the Scoville Heat Units of some common chili peppers used in cooking compared to some extreme, non-edible varieties:

How accurate is the Scoville Scale?

Though Scoville’s efforts are admirable and set a foundation for future heat studies within the world of chili peppers, the original test had one big problem.

One person’s tolerance of spiciness can differ wildly from another so the test was highly subjective.

Today, testing has been replaced with High Performance Liquid Chromatography – or HPLC for short.

HPLC measures the heat-producing chemicals within a pepper and rates them as American Spice Trade Association (ASTA) pungency units.

The conversion of ASTA units to SHUs is about 1 ASTA per roughly every 15 SHUs and is much more accurate in terms of measurement.

The results of HPLC are generally 20% – 40% lower than the results of the Scoville Organoleptic Test, as it removes any human biases or heat tolerance from the equation.

This modern way of testing is a much more scientific way to accurately measure capsaicin content in the food we eat. Contrasted with the subjectivity of the original Scoville Test, HPLC offers us a way to quantify peppers based on measurable results versus the tastes of individuals.

Though the HPLC method of testing is more accurate and gives quantifiable results, the Scoville Scale is still widely used and adopted in and out of the culinary industry.

The hottest peppers on the Scoville Scale

What’s the hottest pepper in the world?

Originally, that award went to the Red Savina Habanero Pepper which sits at roughly 580,000 SHUs, but in recent years growers have been cross-breeding peppers to push the envelope of the Scoville Scale.

These peppers sit over the 1 million SHU range and are referred to as Superhot Chili Peppers.

With bragging rights on the line, these hybrid peppers are getting hotter all the time. Within the last three years, numerous claims have sprouted about potential new champions in the Dragon’s Breath pepper, and the Pepper X.

However, these two have yet to be officially tested for SHUs.

That being said, one pepper sits alone on the throne of spiciness.

Crowned champion as the hottest pepper in the world back in 2017 by Guinness World Records, the Carolina Reaper has a Scoville heat rating of 1,641,183 SHUs. That’s on the low end as there have been others claiming Carolina Reapers can go as high as 2,200,000 SHUs.

It seems only a matter of time before the Carolina Reaper is dethroned. The Dragon’s Breath pepper is rumored to be slightly hotter sitting at 2.48 million SHUs.

Pepper X on the other hand, seems to be next-level hot. If all accounts are true, it sits at 3.18 SHUs. That’s hotter than some pepper sprays!

It’s getting hot in here

Whether you enjoy a spicier flavor or are toning it down for a crowd, knowing the heat level of common peppers is important to your culinary endeavors.

Using the Scoville Heat Scale, you can adjust or substitute the peppers in a dish to better suit you or your audience’s heat preference, such as using serrano peppers instead of jalapenos to up the spiciness in a chili recipe.

Vice versa, you can use bell peppers instead for a milder result.

After grasping some of the basics, it’s time to put the knowledge into practice. Try experimenting with different heat levels, and play with recipes to your taste, or you can try making your own hot sauces!

Growing up in a multicultural home allowed me to experience a wide range of cuisines. Smoke and fire tied everything together, and barbecue became the common denominator. Now, I get to experience great food every day writing and experimenting with the varying techniques and cooking styles out there. 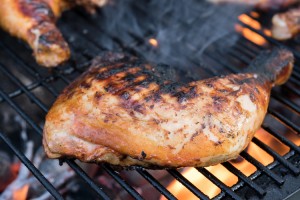 How Long to Grill Chicken for Juicy Results

If you grill chicken for too long, it becomes dry and tough. This is especially true with popular, low-fat cuts such as breast meat.  In 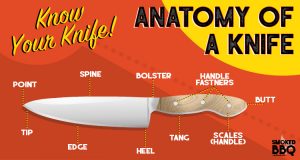 What Are the Parts of a Knife? Know Your Knife Anatomy

The humble knife, along with the grill, smoker, and digital thermometer, are the core parts of a pitmaster’s toolkit.  You will probably amass a vast