Why is meat red? Ask just about anyone and they’ll tell you it’s residual blood within the meat.

But what if I told you that this red hue, as well as the red-colored juice that oozes out when you slice into your meat, isn’t actually blood at all?

Let’s take an in-depth look at why red meat is actually red, and how this can change during cooking.

Why is meat red?

When you remove your meat from its packaging, the chances are that you’ll notice a residue of a red-colored liquid that you may understandably mistake for blood.

In fact, this is actually a mixture of water (fresh meat contains around 70% water), and a bright red protein known as myoglobin that gives red meat its striking color.

What is myoglobin pigment?

Myoglobin is a protein that binds oxygen and iron. It is found in the muscle tissue of nearly all mammals, where it stores oxygen for use by muscles that are in constant or very frequent use.

However, in raw meat, myoglobin pigments will differ in color depending upon their exposure to oxygen. When there is no oxygen exposure, such as in a vacuum-packed steak, the meat appears dark, with an almost purple hue.

When your cut of meat has been exposed to oxygen, it will appear bright red, like the meat you see on display at retailers, pre-cut for sale.

Brown or tan-colored meat can indicate one of two things. Either a low oxygen presence or that the meat is several days old. After a few days, the iron in the pigment becomes oxidized, creating what is called metmyoglobin.

While usually, the change of color itself does not indicate that your steak has gone bad (provided it is within date), once meat’s myoglobin has become metmyoglobin, consumers tend to find it visually off-putting and disregard it as past its best.

How myoglobin changes color during cooking

Myoglobin also changes color throughout the cooking process. Oxygenated myoglobin is red, but as you cook your meat, this changes to a gray-brown color.

Rare cooked beef retains much of its red color; however, once you heat your steak to above 140 degrees, the myoglobin loses its ability to bind with oxygen and its iron atom loses an electron. This leads to the formation of a pale brown compound known as hemichrome, which gives medium-cooked beef its light tan color.

When you heat your meat up to higher temperatures above 170 degrees, hemichrome levels rise further, and the myoglobin turns into denatured metmyoglobin. This is what gives well-done meat its dark brown appearance.

While these color changes are the result of temperature increases, it must be said that a meat thermometer is the most reliable way of ensuring that your meat is cooked through.

While most whole muscle meat will cook as stated above, it is possible that your meat could color slightly differently depending upon the state of its iron content and the presence of oxygen.

For example, premature browning can occur with beef patties that appear fully cooked through; however, when tested with a thermometer, prove to be undercooked.

This may occur when the meat has already oxidized, and the myoglobin has changed to metmyoglobin, as we discussed earlier. So, you can have meat that is brown in appearance but actually undercooked in reality.

On the other hand, you may experience “persistent pink”, where certain sections of meat remain pink in color even when fully cooked. This can occur in meat with a very high myoglobin count when not all of it breaks down.

You can also observe a similar pink shade in cured meats that have sodium nitrite added for preservation and flavor, for example, hams, hot dogs and bacon. In this case, the nitrite reacts with the myoglobin to become a bright red nitrosomyoglobin.

Upon heating, this bright color fades to a pink shade, as it converts into a compound known as nitroso hemochrome.

So, while the myoglobin color changes in cooked meat are generally a good indicator of doneness, you need a meat thermometer to check that your meat is cooked as required accurately. 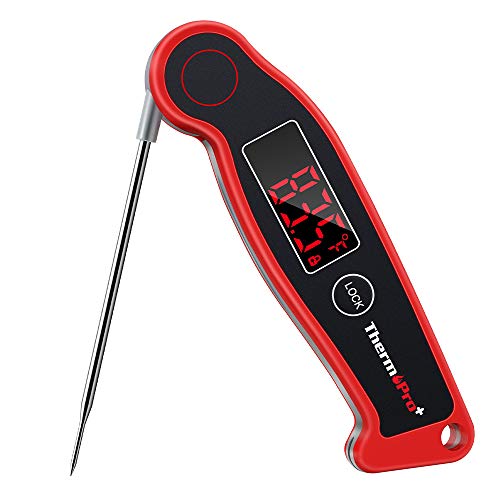 When we think about the different types of meat that we eat, we tend to split them up into categories of red and white meat based upon their general appearance.

Let’s take a closer look at some of the main differences.

Traditionally the term ‘red meat’ is used to refer to beef and some cuts of lamb and pork, although the latter may also occasionally be classed as white meat.

To avoid confusion, it is helpful to look at the individual cuts of meat and determine which part of the animal they are from.

Essentially, meat is muscle. Some muscles are developed to perform more intensive, endurance activities than others.

This requires greater amounts of oxygen, hence why these muscles, in particular, have high levels of myoglobin. This extra oxygen storage and supply capacity allow these so-called “long twitch” muscles to carry out near-constant activities, with a high level of endurance.

Myoglobin, as we know, is a highly pigmented protein that gives red meat its red color. The more myoglobin in the muscles, the darker the meat will be in color.

All animals have some levels of myoglobin, even those that are typically classed as white meat. For example, low amounts of myoglobin are found in the muscles for the wing area of wild birds that fly long distances, or in the leg muscles of grounded birds such as chicken or turkey.

In these cases, though, meat tends to be classed as ‘dark meat’ rather than red meat.

Some people may refer to pork as white meat, although it can also be classed as red. White meat, unlike red meat, contains “fast-twitch” fibers.

This means that the meat comes from muscles that are used specifically for quick bursts of activity, rather than endurance ones, like those seen in red meat.

As these muscles are developed for these quick energy bursts, they do not need stores of oxygen in the form of myoglobin. Instead, they rely upon glycogen, a form of primary carbohydrate storage that is very quickly mobilized when needed, and therefore, ideal for “fast-twitch” fibers.

When raw, white meat has a translucent appearance that becomes opaque and then white when cooked. As mentioned previously, there are certain cuts of poultry that are, in fact, dark meat.

A good example is to compare chicken breasts to legs. The breasts are classed as light meat and the legs, dark meat.

So, while you can find myoglobin in both white and red meats, it is its high concentration in beef, and to a lesser extent, lamb and pork, that gives red meat its color.

Hardworking, endurance muscles in poultry, such as leg meat, also contain small amounts of myoglobin; however, this is not enough to alter the color to the same shade as beef.

Fresh meat is bright red and this color is generally considered more appetizing than brown-tinted meat.

If you’re out grocery shopping for the week, you’re not going to want to purchase a steak that looks like it’s only got another day’s shelf life. Therefore, it’s no wonder retailers are so keen to preserve their meat’s fresh, red tinge for as long as possible.

In order to stop myoglobin from oxidizing with the air, some retailers use carbon monoxide or dioxide gas to bond with the myoglobin and prevent it from going brown.

This process is known as “Modified Atmosphere Packaging” or “MAP”. While MAP will keep meat looking red for a considerable amount of time, it does not prevent it from going off.

This can be extremely deceptive, as meat that was potentially butchered weeks ago will still look fresh. Therefore, if you want to make sure your meat is as fresh as can be, it’s best to get it straight from your local butcher.

Meat is red because it contains myoglobin, a protein that is highly pigmented and used to store oxygen for long-fiber muscles that are in near-constant use.

So, next time you feel grossed out, remember that the red juice oozing out of your steak and left behind in the packaging isn’t blood, it’s just a mix of water and myoglobin!

What do you think? Has this article surprised you? Be sure to share this knowledge with your friends, and if you have any questions, leave us a comment below!

Until recently if you wanted to buy the best quality steak you were severely limited by where you lived. Luckily we are now spoilt for choice, with a range of specialty butcher shops delivering restaurant-quality steak online. Even if you live in a small city, these online butchers deliver steak to your door anywhere in…

Is Blue Steak Safe (And Why Do We Call it Blue in the First Place?)

Blue steak is sometimes described as the closest you can get to a living, breathing cow. Cooked only very briefly, blue steak is served “almost” raw, with only the outer surface sealed on high heat.  Blue steak is very popular, due to its beautifully delicate, melt-in-the-mouth texture. But is it really safe to eat? And…

I’m willing to try anything to guarantee moist, flavorful meat. Especially when I’m cooking a large bird, the fear of it drying out is very real. I used to think you had to leave meat submerged in a bath of salt and expensive herbs and spices (aka wet brining) for days. It turns out there’s…

11 Best Steaks for Grilling For Your Next Cookout

Don’t limit yourself to the same old ribeye and striploin steaks over and over. While there’s nothing wrong with sticking to the classics, there is a whole world of different steak cuts out there to explore. No matter your budget, you’ll find a delicious cut of steak to grill below. The best steaks to grill…

Eye of Round Steak: What Is It and How to Cook It

The eye of round steak is one of the leanest cuts from the back leg of cattle. Despite having a reputation for being tough if cooked improperly, the eye of round cut is great for roasting and grilling because it cooks quickly and evenly without drying out like other cuts such as sirloin or chuck…