All the Cuts of Beef Explained – Your Guide to Buying Beef

These days home chefs are becoming more and more knowledgeable about where their meat comes from.

What used to be specialty knowledge only your local butcher would know, is now general interest.

Don’t believe me? This video on how to butcher an entire cow has over 7.6 million views on YouTube.

Clearly, people want to understand more about the cuts of beef they are buying, and where they come from on the cow.

Either way, learning about the different cuts of beef, where they come from and how best to use them is a great way to become a better cook.

The 8 Primal Cuts of Beef – And the Cuts They Contain

A brief history lesson – in America, until the second world war, beef cuts were not standardized or consistently named.

Around the time of the second world war, the American government decided that this should be standardized.

Fast forward to today, and the USDA recognizes 8 primal cuts or regions of the beast:

Let’s have a look at the 8 primal cuts and how they are usually broken down.

Cuts from this area boast plenty of flavor thanks to all these tissues, but can also be tough. Therefore, these cuts generally need to be cooked longer for the meat to be nice and tender.

For this reason, chuck cuts tend to be a little cheaper. But as long as you know how to cook it, cuts from this part of the animal produces some incredibly flavorsome meat.

Chuck is commonly used for stews or pot roasts, and the ground meat from this area is renowned for making great burgers thanks to all the fat and sinew content.

A tip for the budget conscious is to look out for chuck eye steaks.

On eating you will not notice much if any difference from the far more expensive ribeye steak.

The rib produces some of the most expensive cuts of meat from the beast, thanks to the tenderness of the meat and the fat that tends to be marbled through the flesh.

Due to the natural tenderness of the meat, dry heat cooking produces great results when dealing with steaks and roasts from the rib primal cut.

Delicate dishes that require minimal cooking of the meat are also created with meat from this part of the animal, again, thanks to the tenderness and wonderful marbling of fat within the meat.

The rib primal begins after the 5th rib and runs through to the 12th rib. It includes the long muscle that runs along the spine as well as the ribs themselves.

The plate (AKA short plate or long plate depending on how it’s been separated) sits below the rib, and the meat from this part of the animal is rich in flavor and well marbled.

However, it can be tough so some thought needs to go into how to cook it to get the best out of it.

Some of the cuts that come from the short plate include short ribs, skirt steak, and Philadelphia steak.

It is widely thought that the meat from the skirt steak is the best cut to use when making fajitas.

Seeing it has good fat content, meat from the short plate is sometimes used for ground beef.

When it is braised and combined with rich, smoky flavors, meat from the short plate is difficult to go past if you are looking for a wintery meal when it is cold outside.

Brisket is a cut that you have no doubt heard of multiple times if you are into the world of cooking low and slow.

The brisket sits right below the chuck, and consists of meat from around the breastbone.

It is one of the tastiest parts of the steer, however, it is incredibly tough. This can be overcome if it is cooked correctly.

There is a nice amount of fat in this cut, which means that it produces succulent, juicy meat.

Brisket is best braised or smoked then cooked low and slow. It can also be smoked to make pastrami.

Because brisket isn’t naturally tender and quick to cook, it remains one of the cheaper options, which is good news if you are prepared to put in the time to prepare it.

The shank is probably one of the toughest cuts of meat on the steer. It is the muscle at the top of the leg – so you can imagine it has done a lot of work.

However, when braised, it can be transformed into a much loved classic dish – Osso Bucco.

If you don’t specifically want to make Osso Bucco, the shank can still be used for other soups and stews.

While shank is traditionally a cheaper cut thanks to its tough, sinewy nature, at times it is surprisingly pricy, especially if dishes such as Osso Bucco are in fashion.

The loin challenges the rib for producing the most expensive cuts of meat. This primal cut sits at the top of the beast behind the rib. The loin contains both the short loin, the sirloin, and the tenderloin.

The loin contains very tender meat, as the muscles are not heavily used and therefore do not become tough.

From this section of the steer we get cuts such as the tenderloin, porterhouse, New York strip, T-Bone, and strip steak.

Generally, cuts from the sirloin area are not quite as tender as those from the short loin and tenderloin, as the muscles from this part of the primal cut are closer to the hind legs and are used more, making them a little tough.

However, meat from the sirloin does have loads of flavor and can be very tender if cooked correctly.

The round comes from the rear of the animal. It mainly consists of large muscles, and as such the meat from this cut is tough.

As a result, this meat lends itself to slow cooking, stews, ground beef and reverse searing.

While the round is tough like the chuck primal cut, there is not as much collagen within the meat so it tends not to be as tasty and succulent as the chuck.

Cuts that you may recognise that come from the round are round steak, top and bottom round roasts, eye of the round, tip roast and tip steak.

While the round may not be the most glamourous cut of meat, it is cheap. If you are looking for a cut that is cost effective, especially for ground beef or stews, then meat from the round is a good option.

The flank is a comparatively small section of the steer and sits just below the loin.

It is rich in flavor but does contain long muscle fibers so it can be tough if not prepared correctly.

If it is cut across the grain, and not overcooked, this cut can be a very tasty part of the steer indeed.

Marinating the meat can also help keep it moist, but many agree that the best way to cook the meat of the flank is quickly, at high temperatures.

Another suggestion is to braise the flank, and at times you will find the flank is used to produce ground beef.

What to consider when buying beef

Before you pick your next cut of beef, there are a couple of things you should check.

Why Do Prices Vary So Much Between Cuts of Meat?

As a general rule, the more tender the meat and the less you need to cook it, the more it costs.

At times, there are exceptions to this rule regarding price. If a cut of meat comes into fashion, you may notice the price creep up – even if the cut is not known to be the most tender.

Unfortunately, the growing popularity of low and slow barbecue has caused once cheap cuts like brisket and ribs to inflate in price.

These days, leaner cuts are also gaining popularity for those worried about their health, so some lean cuts are increasing in price too.

What Are the Leanest Cuts of Beef to Cook?

While fat and marbling makes for succulent, juicy meat, some of us are more concerned about reducing the amount of fat in our diet.

Some of the leanest cuts come from the round and the flank.

The tenderloin is an expensive cut as it is not only tender, but also very lean. Keep in mind that it is also known to lack a little in flavor.

While lean cuts can still be tender, they will not be as juicy as fattier cuts due to the lower fat content.

In America, Bison is gaining popularity as it is a leaner meat than beef. It has a gamier flavor, and will not be everyone’s cup of tea, but might be worth some investigation.

Navigating the cuts of beef available can be confusing, but becoming familiar with the primal cuts, and understanding the unique characteristics of different sections of the animal will help when choosing the best cut for your next barbecue.

Have you got a go-to cut of meat? Did you find the information in this article helpful? Let us know in the comments section below. And if you did find this article useful, please be sure to share! 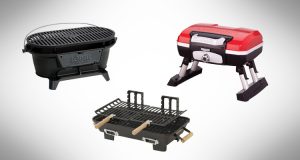 The Best Hibachi Grills for 2020

Based on a traditional Japanese design, the simple hibachi charcoal grill has become a popular choice for people looking for a highly portable yet affordable 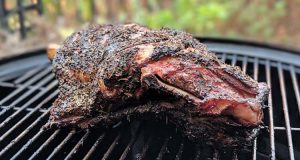 This smoked lamb shoulder recipe is a great way to mix up your typical barbecue. For some reason lamb doesn’t get anywhere near the same