Mastering barbecue brisket is a badge of honor for the home pit master. It’s not about finding the perfect recipe either. By learning the right process and using simple but quality ingredients you’ll be setting yourself up for success.

We created this 6-step checklist to help guide you through the various stages of smoking a perfect brisket. Learning to smoke brisket is a great way master many of the skills required for low and slow cooking so what you learn here will make you a better all-around pit master.

While we prefer cooking with a charcoal smoker, you can follow this guide with just about any type of smoker. If you don’t have a smoker yet, head on over to our guide to the best beginner smokers.

Bonus: Download a free checklist that will quickly show you how to prepare, smoke and slice a brisket.

Bonus: Download a free checklist that will quickly show you how to prepare, smoke and slice a brisket.

Choosing and trimming your brisket

The problem most people have with brisket is that it’s a tough cut of meat. This makes it perfect for low & slow cooking.

When selecting your brisket look for marbling and a thick flat so the leaner part will cook at almost the same rate as the larger point.

While some people like to get creative with fancy rubs, mops, marinades and sauces, there’s nothing better than traditional Texas style brisket with a simple salt and pepper rub.

At this point some people let the brisket warm up to room temperature for an hour before putting it on the smoker.

Others argue that putting the brisket on cold helps it develop a better smoke ring. so feel free to experiment here.

Firing up your smoker

Getting your smoker setup correctly and placing your brisket will help ensure it cooks evenly and develops a rich bark and smoke ring.

For some reason the way you place your brisket on the smoker can be quite a hot debate. Before you decide you’re in team fat up or fat down, let’s figure out what the fuss is about. The reason most people say fat side down, is because on most smokers the heat comes from below.

While this step takes the longest by far, it’s also the easiest step. Most of the time doing nothing is a safe bet! While you need to keep a close watch on the fire and keep the temperature steady, it’s important to leave the lid on and not check the meat too often.

This is where having a quality dual probe thermometer comes in incredibly handy. We are big fans of the Smoke by Thermoworks. It’s a rugged unit that can withstand a beating. It’s also super simple to program, and the large display is easy to read from a distance.

The hand held receiver allows you to go to bed and the alarm and vibrating alarm will wake you up if your smoker gets too hot or too cold.

If you’re using something like a pellet grill or electric smoker that struggles to generate enough smoke to produce a good smoke ring, you may want to consider using a smoke generator like the Amazen Pellet Tube Smoker.

What to do while your brisket is cooking

When the lid of the smoker is open you’re losing heat and smoke and it’s going to take awhile to recover the heat. “If you’re looking you ain’t cooking”.

So aim to check it as little as possible, and if it’s looking dry consider using a spray bottle with some apple juice or apple cider vinegar.

Wrapping and dealing with the stall

To wrap or not to wrap, that is the question. Wrapping in foil is a controversial topic that can lead to fights. You can wrap the brisket after around 4-6 hours or you can cook for 11 or 12 hours and never need to wrap.

This is definitely something you can experiment with and decide what works best for you in different situations.

In this case we’re going to wrap. When the internal temperature of your brisket hits around 160°F -170°F the temperature can stall as the brisket tightens up and squeezes out moisture.

Resting and slicing your brisket

Once you’ve taken the brisket off the cooker it’s still not ready to eat. It’s important to let it rest. Wrap the brisket in butcher paper or foil and then a towel and leave it in a cooler for at least one hour but up to 4 is fine.

Brisket is a very uneven cut of meat. Some parts are fatty, some are lean some are thick and some are thin. It can take a while to learn to slice it so don’t worry if it’s not perfect the first time. When it’s rested for at least an hour it’s ready to slice:

OK there’s actually a 7th step but we didn’t think we had to tell you to eat the brisket! By this point you’ve been waiting for hours and hours and it’s time to tuck into a well deserved feast.

If you’ve followed the steps in this guide, your brisket should be moist, with a rich bark and a satisfying smoke ring.

Having said that, it can take several tries before you get every little detail right. Don’t be upset if parts of the brisket are a little dry, or the smoke ring isn’t perfect.

Hopefully you’ve found this guide helpful, and be sure to let us know in the comments below if you have any tips we’ve missed. 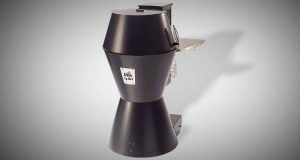 I would never recommend buying a grill just because it turns heads. There are plenty of leaky, budget smokers that look cool but couldn’t maintain 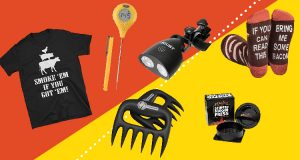 Christmas is coming, the geese are getting fat, and the pitmaster in your life is going to need some new toys to cook those geese