The portable pellet grill market is getting competitive with solid offerings from the likes of Traeger, Green Mountain Grills, Camp Chef, and now with the Sportsman Portable.

We already have a detailed review of the full-sized Sportsman 820, but we were keen to get our hands on the portable version which has unique features for tailgating, camping and grilling on the go.

In this hands-on review, I’ll share my experience cooking on the Sportsman portable over the last couple of months, plus what I think of the portable features after putting them to the test.

Pit Boss sent me a free grill in return for my honest review. All thoughts and opinions are my own.

The Pit Boss Sportsman is designed as a portable pellet grill. It features foldable legs, wheels, and a latching hood and pellet hopper.

It is a digitally controlled, fully automatic, pellet feed grill in the price range of the Camp Chef Pursuit and the Traeger Tailgater.

The Sportsman packs a whopping 19 pounds of pellets in the hopper and carries a 5-year warranty, both are the best in their class.

Here are the Sportsman’s full specs:

This is a very compact, sturdy grill, and is simple to break down and transport.

As with most of the pellet grills in the “portable” class, the Sportsman is heavy at nearly 80 pounds.

After unboxing the unit I noticed that it looks like the leg brackets had been hit with a hammer at the factory to get them to align.

The hood handle and other pieces are lightweight and not the best quality, but functional.

There are some scratches in the paint, but overall it arrived in good condition, assuming the hammered leg brackets are not an issue.

Assembly is straightforward; attach the legs to the body with a screwdriver and adjustable wrench (not provided) and the wheels and axels slide on and fasten with a keeper ring.

Next, slip the grease tray into the front of the unit, insert the heat shield/grease pan into place, attach the handle that opens the direct flame louvers or “Flame Broiler”, and place the grills into the unit.

The whole process took about 30 minutes, and most of that was removing the unit and its components from the packaging.

Cooking on the Sportsman

After filling the pellet hopper and priming the unit I followed the initial burn-in sequence: turn the dial to SMOKE, wait a few minutes for thick smoke to appear, then set the temp at 350 degrees for 45 minutes.

After the burn-in, I lowered the temp to 250 degrees and loaded the grill with 5 lbs of chicken wings.

I then turned on my Inkbird IBT-4X temperature thermometer with 3 probes connected as shown.

After a few minutes, I checked the unit temp vs my Inkbird temp probes; they were not even close.

I tested my Inkbird probes earlier that day and found them to be within 5 degrees at between 200 and 400 degrees, so I know it was the unit.

Pulling the “Flame Broiler” handle out, which opens a louver allowing some flame to be exposed to the grilling surface did allow for more heat (about 15 degrees), but mostly just in the center of the grill.

I adjusted the “P Set” button to 2 which changes the auger feed/auger off time. This resulted in a little added temperature and smoke.

After an hour I raised the temp to 350 degrees, 10 minutes later I checked the probes on my Inkbird, and the unit temp was still reading 30 degrees higher than my calibrated probes.

I kept raising the setpoint temperature until I got 350 on my Inkbird probe, which happened in 15 minutes. At that point, the unit was set to 450 degrees.

I had the same issues whether I was cooking low and slow with baby back ribs or hot with boneless skinless chicken breasts and vegetables. No matter what temps I set the unit, the readout was completely unreliable.

My remedy for this was just to disregard the setpoint and readout and adjust the temps according to my Inkbird. It’s great that the Inkbird is Bluetooth, but I still had to go and adjust temps frequently, especially on the ribs. 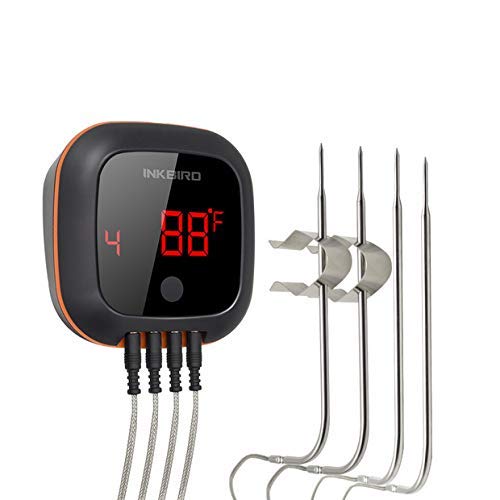 Once you’ve completed the “Feed” and burn-in, operating the Sportsman is extremely simple: set the Sportsman to SMOKE, after about 2 minutes.

The temperature will go to 160 degrees or more then set it to your desired temperature. Decide whether you want the direct flame bar, open or close.

The Sportsman will run as advertised.

The “P” button determines the Off Time of the auger feed, so the default is P4 which is 115 seconds of off.

The auger feed cycle is always on for 18 seconds.

To set the “P” setting turn the unit to SMOKE and push the “P” button gently to the deserved setting according to the above chart.

IMPORTANT: Push the “P” button gently. If you push it too hard you can damage it.

Releasing the tab and collapsing the legs make transporting on a smooth surface simple. But the wheels are small, so uneven surfaces are a little more work, but not daunting.

The main grill racks are porcelain so clean-up is a breeze. You can put these directly in the dishwasher and they come out clean.

The grease tray pulled out from the front. Just empty this and wash with soap and water.

The Flame broiler (main plate), and pull rod are easily removable which allows access to the flame pot. The plate and rod news a little elbow grease, but overall clean very nicely.

Once you remove the grills, the flame broiler grill plate, you can vacuum out the ashes from the lower unit.

The unit came with a dust cover, but it’s easy to clean the exterior with soap and water.

“Allow the grill and cooking grids to self-clean by running the grill at a high temperature for 5 to 10 minutes after each use.”

The Sportsman does everything as advertised. It smokes well on the low setting, not quite as much on high – but still adequate.

As with all of these small pellet grills, temperature variances are expected and can be frustrating, but the unit will achieve about 450 degrees.

Using the “P” button 1-10 can increase or decrease desired smoke and heat.

Searing is no problem when the heat rod lever is pulled out. I got over 450°F when searing my burgers.

Should you buy the Sportsman?

The Sportsman has been an extremely dependable grill. It’s sturdy, easy to clean, and fairly affordable.

The model I tested, P8260PS2 does not include WiFi capability.

Largest hopper capacity in its class at 19 lbs. It comes with 1 meat probe and also comes with a free cover.

Whether you are camping or just barbequing in the backyard, the porcelain-coated cast-iron cooking grates and “grease management system” are a huge benefit.

Startup and shut down are child’s play.

We are big fans of the pellet grills from Camp Chef (The Woodwind is our top pick for best pellet grill) so when we got our hands on their portable pellet grill, the Camp Chef Pursuit 20, we were excited to see how well it performed. As well being the only Camp Chef grill designed…

Z Grills have been shaking up the pellet grill market ever since they stopped manufacturing grills for Traeger and started selling direct to the public back in 2016. The 700E is their best selling grill, so I was keen to get my hands on it and put it through its paces. In this review I’ll…

I’m always on the lookout for grills that hit the sweet spot of good design and value I recommmend to folks who don’t have huge budgets but still want great performance. The new lineup Victory grills produced by BBQ Guys seemed like I good candidate so I was excited when they offered to send one…

When you picture a backyard barbecue with food sizzling on a charcoal grill, the grill you are most likely picturing is a Weber Kettle. Weber hasn’t changed this design in decades because it simply is the best of the best. Its shapes creates the ideal grilling environment with a large amount of space and adequate…

The Z Grills 700D4E is an upgraded model of the super popular 700D. It’s new for 2021 and I was eager to see what’s changed since we reviewed the original. In this review, I’ll go over my experience cooking on the Z Grills 700D4E, what I like about it and what slightly missed the mark….

In most cases buying a versatile grill means you’re going to be giving up something. Luckily this isn’t the case with Kamado grills. These charcoal fueled, ceramic grill/smoker hybrids go back over 3,000 years. Usually made with ceramic, Kamado grills offer superb insulation, which makes them highly efficient smokers. But unlike charcoal smokers, they also…