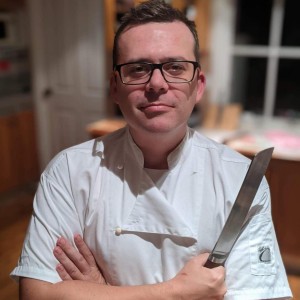 Roast Beef. Fish and Chips. Trifle. Jelly and Custard. Spotted Dick. Bread Pudding. All traditional British food, made on a budget, and ridiculed the world over.

Bread Pudding in particular holds a special place in my heart. My dad used to make it with me as an 8-year-old boy when mum was out with her friends for the evening, and I used to love it.

It’s my first memory of actually helping to cook anything regularly. Dad’s Bread Pudding was overly sweet, sugary, soggy and often undercooked. It was great!

My version today is an upgraded, pimped out, jacked up version of a traditional British Bread Pudding, using an Easter classic, hot cross buns. Paired with the traditional flavors of cinnamon, nutmeg and vanilla, with cream and eggs. I’ve also added in some white chocolate and cranberries for a decadent, rich and delicious twist. The added smokiness of cooking over charcoal and wood just finishes this dessert perfectly.

If you struggle to find hot cross buns, you can use regular white bread, croissants, even donuts. In fact, I’d encourage you to experiment!

What is Bread Pudding?

It is believed to have first been listed in the 18th Century British Cookbook/Household Help Guide “The Compleat Housewife”, although I doubt this name would get a publisher’s checkmark in this day and age.

It consisted of a baking dish lined with puff pastry and then layered with penny loaf with butter, raisins and currants in alternating layers. A thickened spice cream was then poured over it with orange blossom water, before being baked in the oven. It was listed as “A Bread and Butter Pudding for Fasting Days”, and called for the bread to be stale – which is still the recommendation in many recipes today.

Many other countries also have a Bread Pudding style dish in their repertoire too, both as sweet and savory versions, but mostly they are variations on the above dish.

What are Hot Cross Buns?

Here in Australia Hot Cross Buns are an absolute Easter staple. These little spicy fruit buns are so popular they are sold in supermarkets all year round.

I’ve heard that they aren’t nearly as readily available in the United States though. You can always try baking them yourself (I recommend this recipe or try our own version done in the grill), but if not just use regular white bread or croissants. The exact type of bread you use isn’t very important.

If you’ve never tried it, smoking desserts sounds like a crazy idea. It turns out that the smokiness of cooking over charcoal and wood can give your desserts a beautiful depth of flavor.

Plus its fun, and convenient to cook outside, especially if you already have charcoal in the grill from cooking your dinner.

Although this recipe uses the same essential ingredients as a traditional style custard, we won’t be pre-cooking it, or turning it into custard yet, as we’ll be essentially cooking it later as part of the bread pudding.

In a medium bowl, mix together 4 whole eggs and the yolk of one more, and add 2 ½ cups of pouring or cooking cream to the bowl. Add to this 2 tsp vanilla extract (I use paste with seeds for a richer flavor), a pinch of salt, and a tsp each of cinnamon powder and ground nutmeg.

In addition, you could add 1 tbsp of brown sugar or caster sugar too, for a slightly sweeter dish. The hot cross buns already have some cinnamon and other traditional spices, so you don’t need to be too heavy with those spices here.

Using your preferred method (I use a chimney starter with a full chimney of charcoal), light your smoker and you’ll want to aim for 375°F for this cook.

If it overshoots slightly, that’s not a problem, but try not to get it above 390°F or you’ll overcook the outside leaving the inside raw and undercooked and soggy.

Whilst this is fine for 8-year-old boys and middle-aged dads who “cook” to spend time with their sons (Thanks dad!), your guests or family may not be as enthusiastic about it.

I use Pecan chunks for this particular dish, although cherry or apple will work equally as well. Let us know what you use in the comments!

Whilst your BBQ is coming up to temp, it’s time to assemble your Bread Pudding. Take your hot cross buns and tear them into approx 1.5-2” chunks. You don’t need to worry about being exact, the charm of this dish comes from its rustic, simple background.

Put them into your 9”x9” baking dish, packing them together like a bready (or hot cross bun-ny) Tetris game.

Liberally layer your hot cross bun base with white choc chips and cranberries – I use approximately half a cup of each, but I’m not the fun police, go wild if you want more! Once you’ve done that, pour over your custard mixture, making sure to cover all the area.

Don’t worry if it looks a little bit soupy at this point (although that should be a potato and leek style consistency, not a broth!!), it will set during cooking.

Once your BBQ is up to temp, add a couple of chunks of your smoking wood, and put your baking dish into the BBQ and close the lid.

Leave to bake for around 45 mins, or until the center reads around 165°F. It should still have a bit of a jiggle to it like jello (almost like a souffle consistency), but that will set a little more as it continues to cook and then cools after you’ve taken it out of the smoker.

After about 10 mins of cooling, you can serve this up with whipped cream or ice cream and a dusting of powdered sugar and cinnamon if you like.