When Weber announced they were launching their first pellet grill the news took the barbecue world by storm.

Besides some slick marketing from Weber, we didn’t really know what to expect. Only a handful of people got to cook on the product before it’s launch, which led to a lot of hype and high expectations.

Things got even crazier when the SmokeFire finally launched. Hype turned into disappointment and canceled orders as early purchasers started running into issues from annoying “pellet bridging” (more on that later) to dangerous grease fires.

With so much controversy I couldn’t wait to get my hands on the SmokeFire to put it to the test. We shelled out $1200 of our own money for the larger EX6 model.

Unfortunately, my review was delayed when Amazon somehow lost my grill (how can you misplace a grill?)

The replacement grill finally arrived, and I’ve managed to complete a few cooks on it. Read on to find out what I thought of the SmokeFire and whether you should buy one. 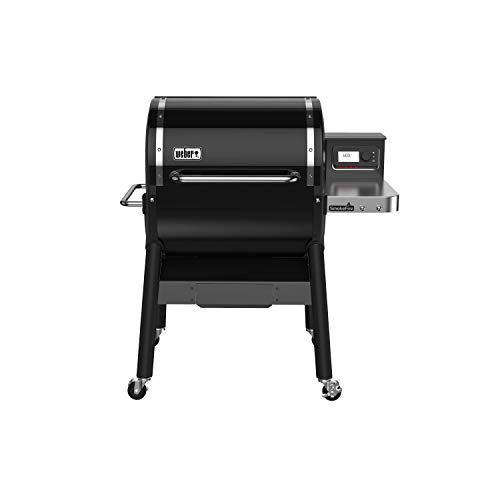 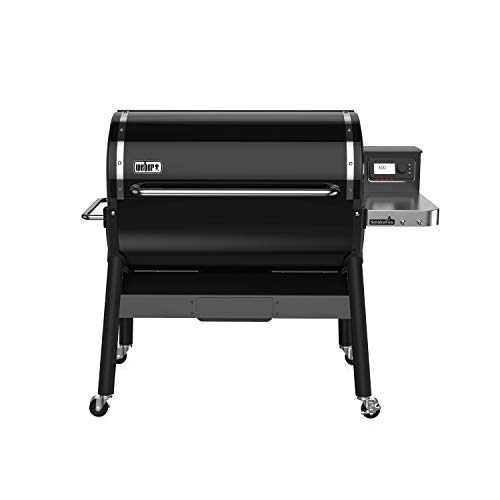 While I still have a lot of testing to do, I’ve managed to get a few cooks under my belt and have compiled my first impressions.

The first section of this review will focus on my impressions of cooking on it. If you want to learn more background about the various controversy behind this grill, keep reading further down the article.

After getting the grill assembled my first impression was how good it looked. The paint job looks good and it definitely looks like a Weber and not a Traeger rip-off like a lot of other pellet grills.

I can understand if some people might find the design a little “tame” though, and the tiny coster wheels and lack of storage space or side tables is disappointing for a grill at this price point.

Although the quality of the parts looks good, unfortunately, I noticed a few defects.

Both issues are cosmetic and don’t affect the performance.

I had already heard of a lot of folks having issues with “pellet bridging”. This just means that the pellets stop sliding down into the auger which can result in the temperature dropping, even though you still have pellets in the hopper.

To my disappointment, during my initial burn off, “pellet bridging” did occur.

I have heard that part of the problem can be the size of the pellets, but these pellets work just fine in all the other pellet grills/smokers that I have tested.

With that said, Weber now offers a complimentary hopper accessory that is supposed to help with pellet feeding.

I just can’t understand how a company with the resources that Weber has could not pick this issue up before release during their product testing.

One of the biggest selling points Weber have made is how well the SmokeFire performs at searing. A task that almost all pellet grills struggle with.

After a few tests, I have to say I’m impressed. Everything I’ve cooked has seared nicely and tasted delicious.

If the lid is left open for very long (over a minute or so), the grill loses a ton of heat almost to the point of no longer grilling the food. It then takes several minutes to start building up heat again.

No amount of engineering can make a pellet grill perform like a propane grill,

While I have focussed on the negative issues, overall, the food that has been grilling and eaten has tasted very good.

After several years covering the barbecue industry, I don’t believe I’ve ever seen a product launch with more controversy.

While this isn’t strictly part of our review, I wanted to include a section that covered some of the details behind the product launch to help you understand why you get such strong emotions on both sides when it comes to this grill.

Before it went on sale, everyone was hyping the Weber SmokeFire up, saying how amazing it was going to be.

It didn’t help that Weber only let a handful of people test the grill out behind closed doors, in controlled conditions on tested prototypes.

Videos like the one below only stoked the excitement levels. I should point out that I don’t have anything against Baby Back Maniac, which is a fantastic YouTube channel which you should definitely check out.

When the grill finally started shipping in February 2020, excitement turned to confusion and disappointment as initial reviews started to come in.

The same person who made the video above posted an overnight cook video which ended in a grease fire.

Lots of people were also complaining about the design of the pellet hopper not being steep enough, resulting in pellets not dropping down into the auger.

People also questioned Weber’s decision to allow grease to fall directly onto the ‘Flavorizer’ bars and then sit at the bottom of the grill where it mixes with the ash.

To make matters worse, the companion app was clearly rushed and didn’t function correctly when the grill first shipped. A firmware update was also required, and if you didn’t do that you were hit with even more problems.

These initial negative reviews resulted in a rush of canceled orders

Things were looking bleak for Weber, until Meathead from amazingribs.com went off on his Facebook page, claiming that the initial testers didn’t know what they were doing, and we should all wait until they had time to publish their review before making up our minds.

Some other barbecue “influencers” like Harry So from SlapYoDaddyBBQ also posted more positive videos that didn’t run into any dangerous grease fires.

Now that it’s been out for a few months and the dust has started to settle the conclusion seems to be that the SmokeFire is a promising product, with some serious flaws.

It’s disappointing that Weber would ship a product with so many obvious flaws. Although when you think that they’ve have so many years to perfect the design of their gas and charcoal grills and smokers, it’s not surprising that their first attempt at a pellet grill isn’t perfect.

It really comes down to your personal preferences. If you’re happy to be an early adopter and don’t mind having to follow a few workarounds, the SmokeFire could be perfect for you.

NOTE: The below section is our initial write-up when we heard about the SmokeFire

Rumors have been floating around about this new grill for a while now so we were excited to finally get some details from Weber.

We’re happy to say that the only difference between the two grills is the size of the grill grates so you don’t get punished for buying the cheaper option.

It always annoyed us that Traeger reserve some features for their more expensive models.

At first glance, the design of this grill looks similar to the Traeger Ironwood series. It’s clear that Weber are looking to compete with Traeger who is currently dominating the pellet grill market.

The SmokeFire offers a few features that look to set it apart from the rest of the competition.

You can see an overview in this marketing video from Weber, and we’ll go into more detail in the sections below.

Manufacturers have tried to get around this limitation. Camp Chef is known for its searing station attachment, although you have to purchase that separately.

Pit Boss pellet grills use a sliding plate to allow searing over an open flame, but the flame area gives you limited space for searing.

The Smoke Fire gets around this design flaw in two ways.

More importantly, Weber has made good use of their stainless steel flavorizer bars (used on their gas grills) to help direct heat from the firepot to the cooking grate.

If they can pull this trick off, the SmokeFire will quickly become one of the best grill smoker combos available.

Cleaning up grease and ash has always been a major problem for pellet smoker owners. The SmokeFire has a few nifty looking innovations that look to help solve these problems

Weber refers to this feature “Bucket-free grease & ash removal” which is a reference to the grease bucket commonly seen on pellet grills.

We’ll have to wait and see how well this system works in the real world. In the photo above it looks like the ash and grease are separate, but it will be interesting to see if this is actually the case or if it ends up making more mess.

If you were wondering why the box on the side was so small, it’s because Weber has placed the 22-pound pellet hopper at the back of the grill.

This allows them to use a shorter, inclined auger which is aimed at reducing pellet jams.

We’re happy to see you can open the hopper at the bottom to remove unused pellets or if you want to swap to a different type. This is a great feature as many pellet grills require a shop vac to clean out old pellets.

The auger includes a sensor to let the companion app know when pellets drop below a certain level.

Weber has already dabbled in this area with the acquisition and development of the iGrill Bluetooth thermometer line, however, this is their first attempt at a truly WiFi-connected grill.

The grill will connect to your WiFi and then you’ll be able to control it through the Weber Connect App.

Weber has partnered with smart cooking technology company June to offer an app with temperature doneness reports and ETA on when food will be done based on food and grill temperature.

None of this sounds revolutionary, with all current-generation Traeger grills offering similar capabilities.

Weber hope to set themselves apart with detailed recipes and step-by-step instructions built into the app.

One feature that caught our eye was “flip notifications”. That could definitely come in handy.

We’ll have to wait until the release of the SmartFire on February 10, 2020 before we can reach a final verdict, but from what we’ve seen it looks promising.

The searing capability looks like the killer feature that will make this grill stand out from the competition.

Weber has clearly played to their strengths here, and by partnering with a food technology company the Weber Connect features look to be at least as good as the best smart grill offerings from other brands.

The price makes this grill competitive with Traeger, although starting at $999.00 this definitely isn’t a budget option. 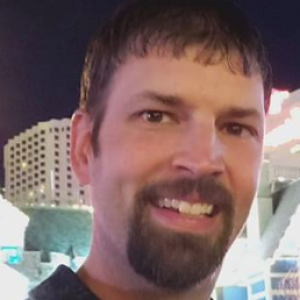 Growing up in a bbq'ing family in the backwoods of Tennessee, we approached our food with passion! When I wasn't at school, I was working at the family restaurant smoking meats, searing steaks, and grilling burgers. Although the restaurant has long been retired, those family traditions and recipes still live on through backyard bbq's and grill outs. I still love experimenting with new recipes and methods. Being a techy kinda guy, I also enjoy trying new gadgets that aid in the overall experience.

A good pair of bbq gloves are an essential part of any pitmaster’s arsenal. From arranging coals to moving food around a hot grill, you want to 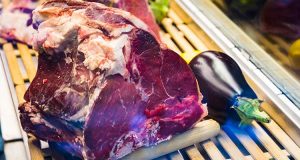 If you’ve ever been lucky enough to taste a ribeye steak that has been dry aged 4 – 6 weeks, you’ve come pretty close to